Today I have three polishes that have been on my wishlist for a very long time.

(Seriously, ebay browsing- you get me in big trouble)

One of these may look familiar as another Deborah Lippmann “Glitter in The Air”/Revlon “Whimsical”. Surprisingly, this one ended up being a bit different than “Whimsical”; but I’ll throw that out in front of you now and hope to bait you to lure you after the jump to see it later in this post. 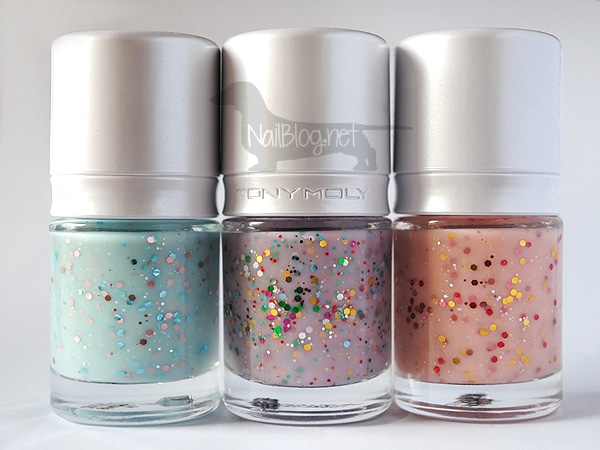 See if you can remember those names all the way after the jump!! 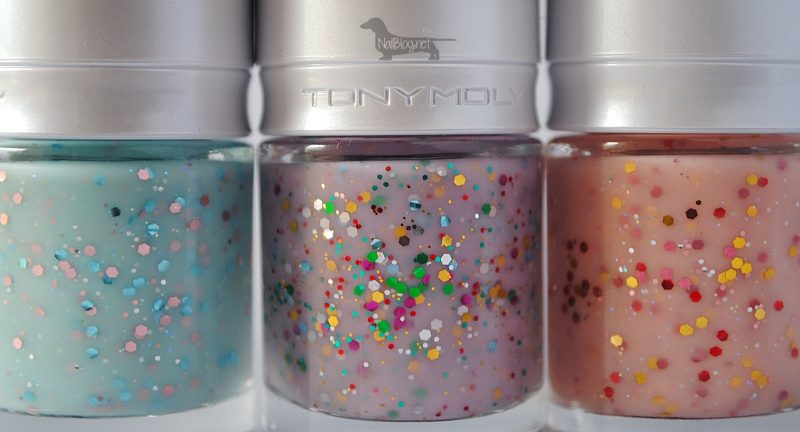 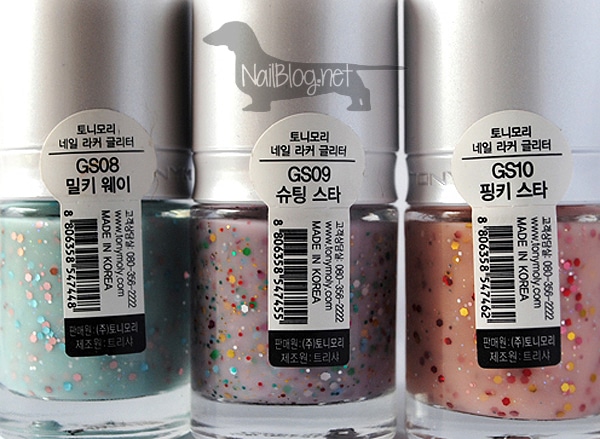 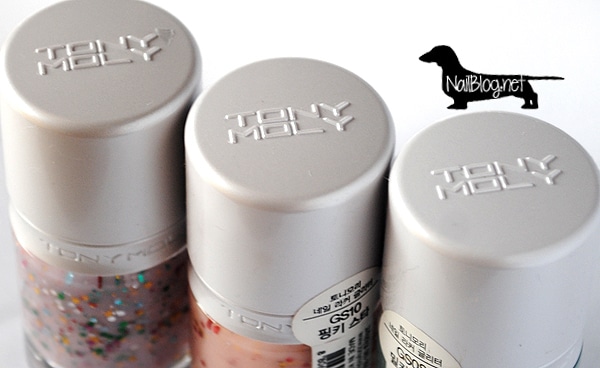 Ahw, who am I kidding. I love you guys too much to keep you waiting.

“GS08″ (AKA “Milky Way” – thanks Suzzie!) at first glance appears to be another Revlon “Whimsical”/Deborah Lippmann “Glitter in The Air” type polish. It features several size hexes of blue and pink plus smaller iridescent glitter swirled in a baby blue jelly base. 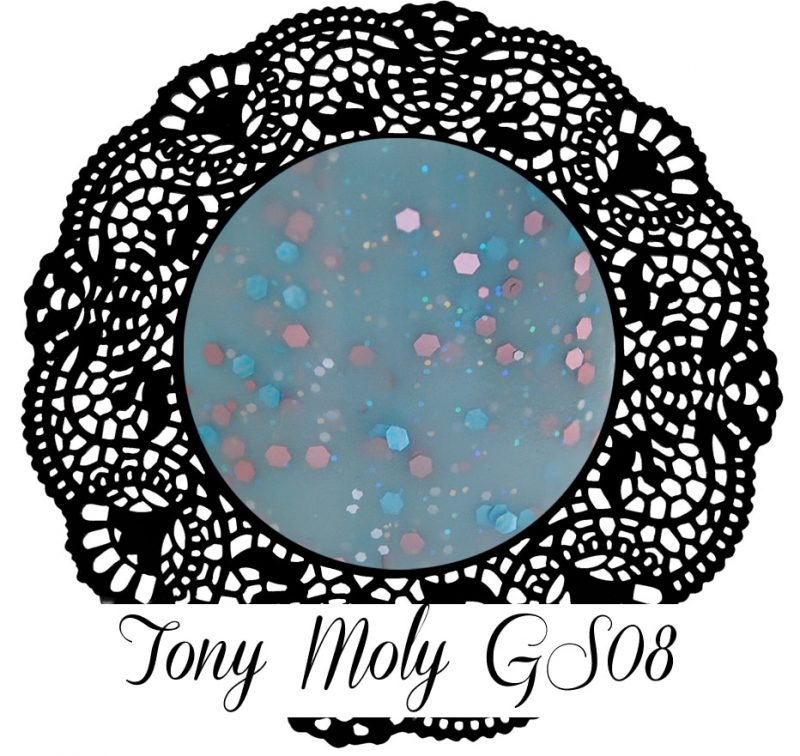 However, when placed next to Revlon “Whimsical”, there are a few differences that are apparent to the naked eye. In comparison “Whimsical” looks yellow hued, almost dirty, and thinner. 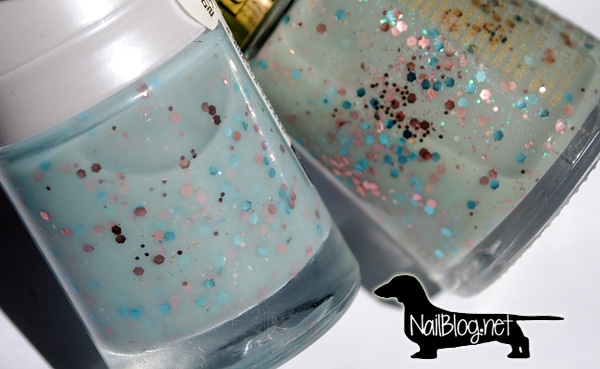 The glitters are the exact same colors, however; the Revlon glitter does look to be of *slightly* better quality being a bit brighter in color and of more consistent, sharpened shapes. This could be due to Revlon’s base being thinner thereby making the glitter only appear brighter, but whatever the case may be these are my initial observations.

“GS09″ (AKA “Shooting Star” – thanks Suzzie!) is the most “yogurty” looking one of the bunch. This one features an entire rainbow of colors in two different hex shapes surrounded by smaller gold hexes in a purple jelly base. 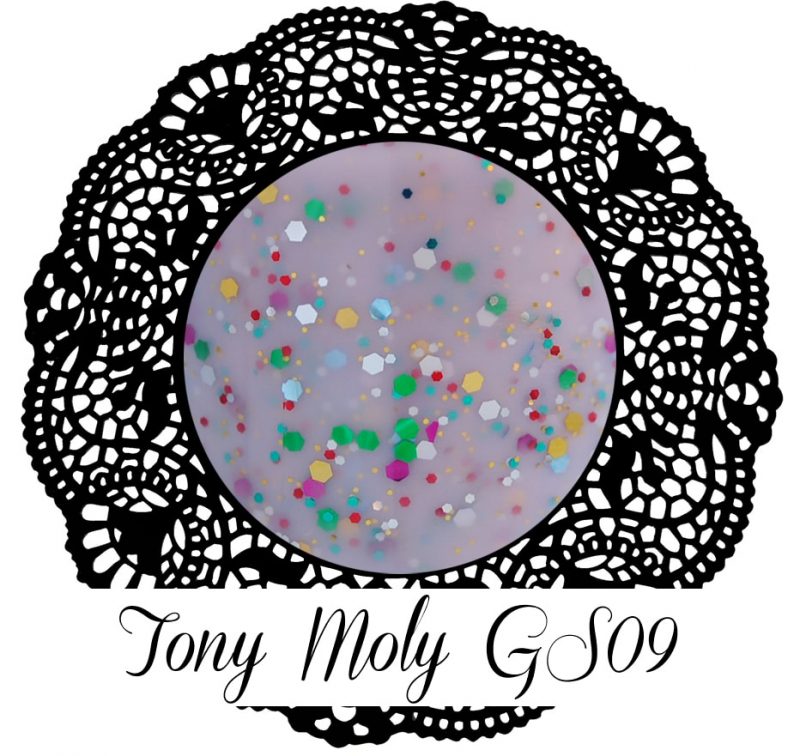 “GS10″ (AKA “Pinky Star” – thanks Suzzie!) the last of this trio set; offering large pink, red, and gold hexes surrounded by rainbow iridescent hexes of two smaller sizes swirled into a light pink jelly base. 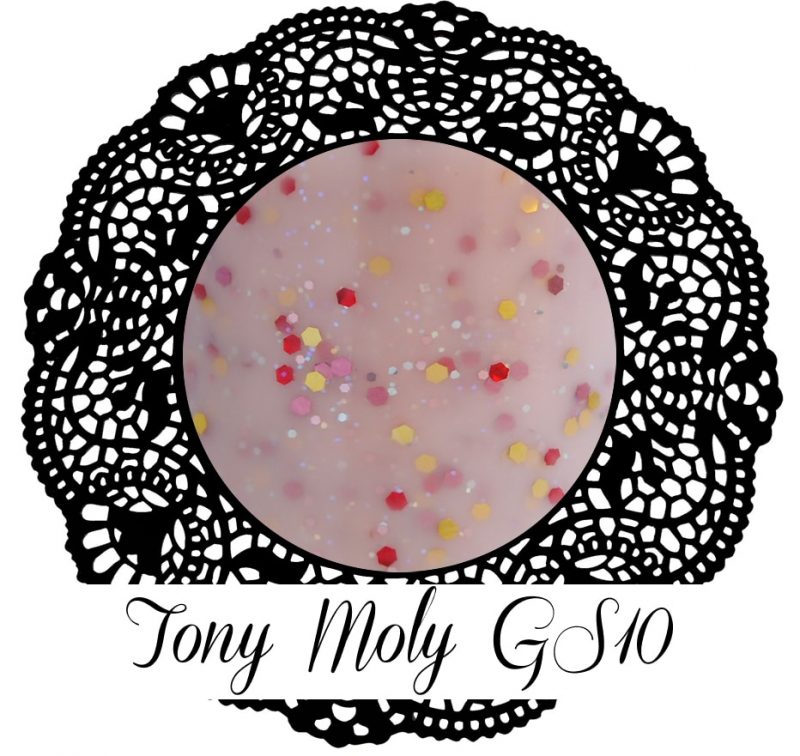 I’m not gonna lie, these brushes were almost as bad as the Spoiled brushes. They were short overall and the brush bristle itself was a too soft mop that picked up too much formula.

In the brush shots below (which are clickable into super-size) you can see how they also “bell” out at the tips only further amplifying the moppy moppiness. 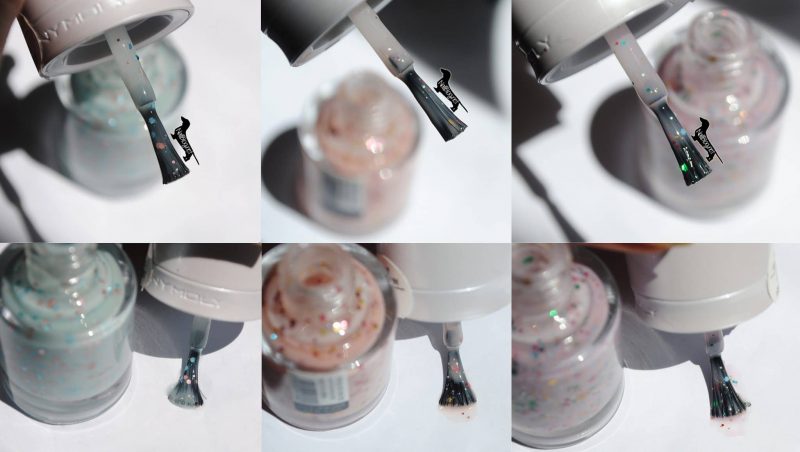 BUT…everything I’m about to show you should make you forget all about that word.

First, remember that comparison of “GS08″? We’ll let’s put it into pictures..

In the below picture is SIX coats (and thicker coats) of Revlon “Whimsical” compared to four regular coats of Tony Moly “GS08″.

(Revlon on the left, TM on your right) 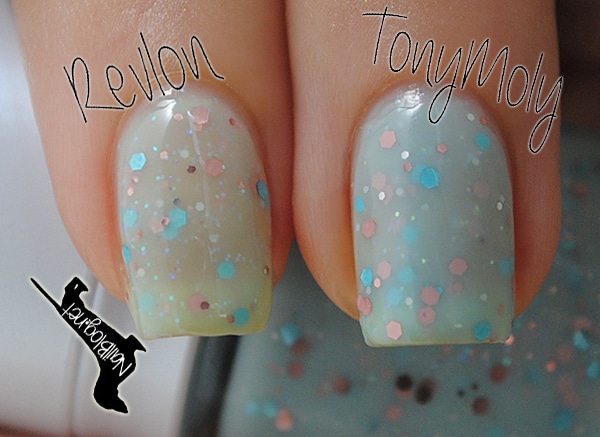 As far as attempting to wear these polishes on their own, I think the GS08 just gave Revlon it’s walking papers.

Here is how all three of these polishes fair on their own, over completely bare nails: 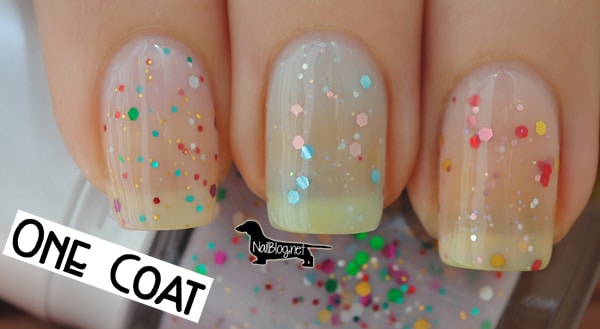 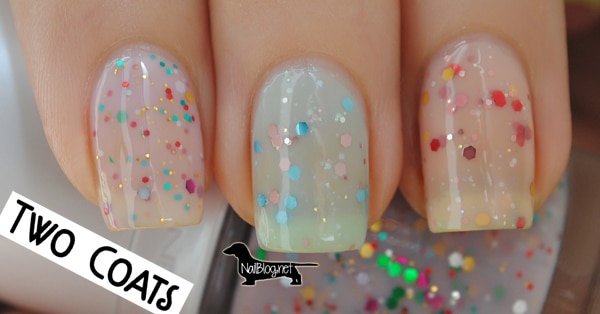 If you’re looking to achieve opacity, you’re looking at 3-5 coats depending on the application. I was actually pretty surprised these are able to be worn on their own at all!

So jelly, so squishy… 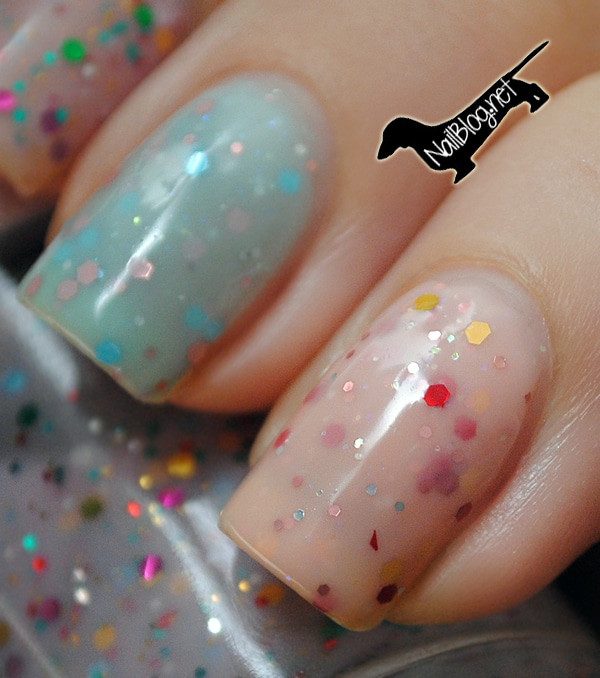 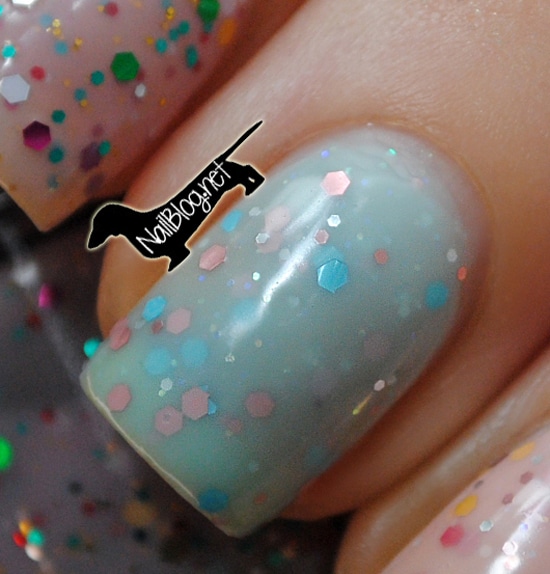 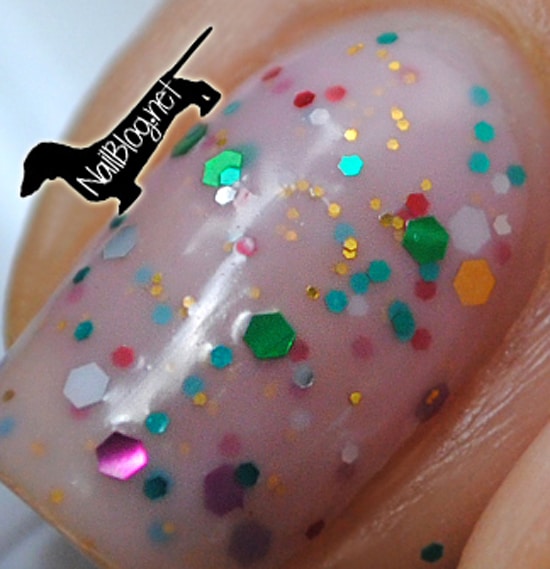 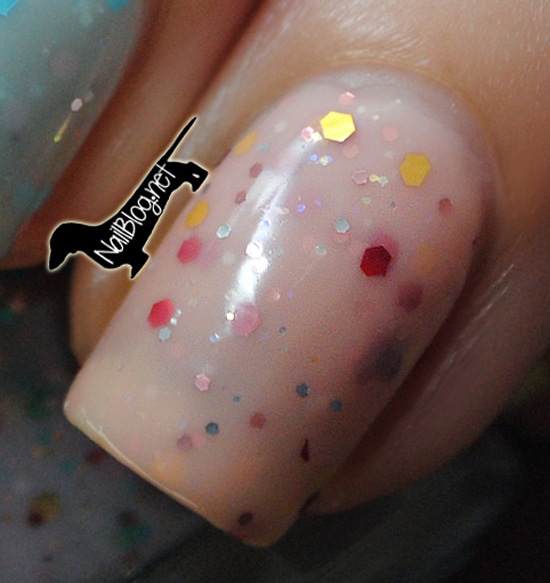 Of course if you don’t have the patience to sit through the application of jellies, you can always apply them over white. 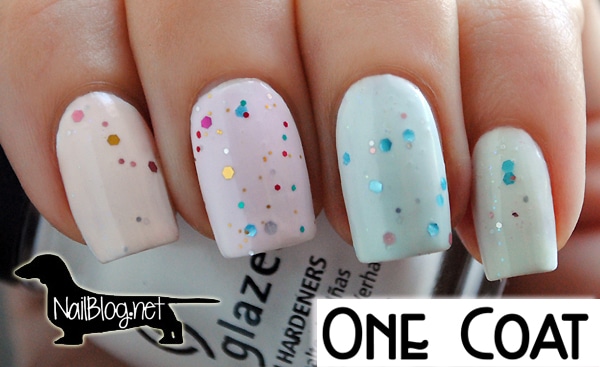 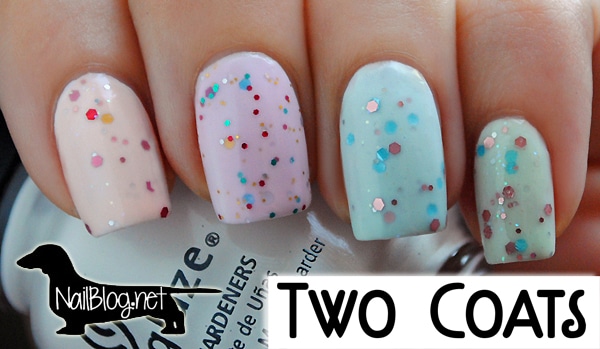 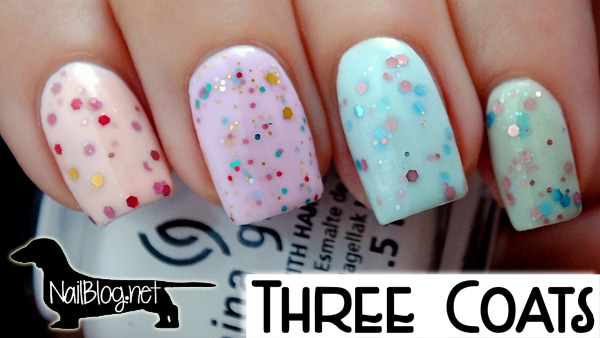 -I find they do dry slower than the average polish.

-The purple (GS09) is the most opaque, although you wouldn’t think it to look at that color and how brightly/sharply the glitter shines through!

-The only venders I have found for TonyMoly nail polish are over-seas companies so you will have to wait 2-4 weeks for delivery. Mine arrived around the 3 week mark.

-What the pickle does “TONYMOLY” mean? Aside from the weird noises I make when I say this inside my head, it is roughly translated into “putting style into packaging”. That’s…weird.

“Hey, Pickle, what should our slogan be?”

“WE PUT GOOD STUFF IN BOXES!”

(*note: I do understand what they were going for with that, especially considering their other products I’ve listed below)

-The company claims they are safe to use with safe ingredients. Some vendors do specifically declare these polishes “Big 3-Free”. However, with no clear, consistent and definite answers? Take it how you will.

-They wore marrveeeellooussllly and dried smooth. 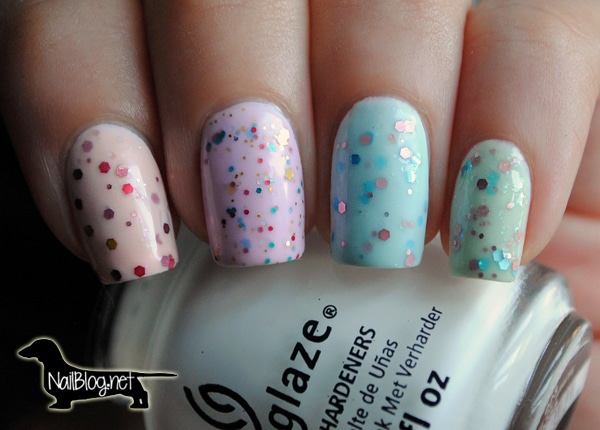 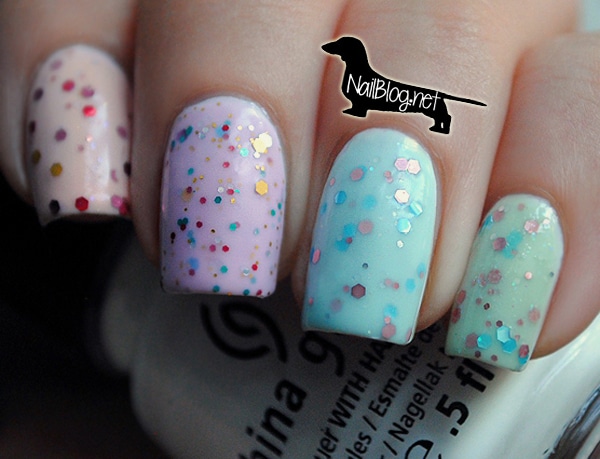 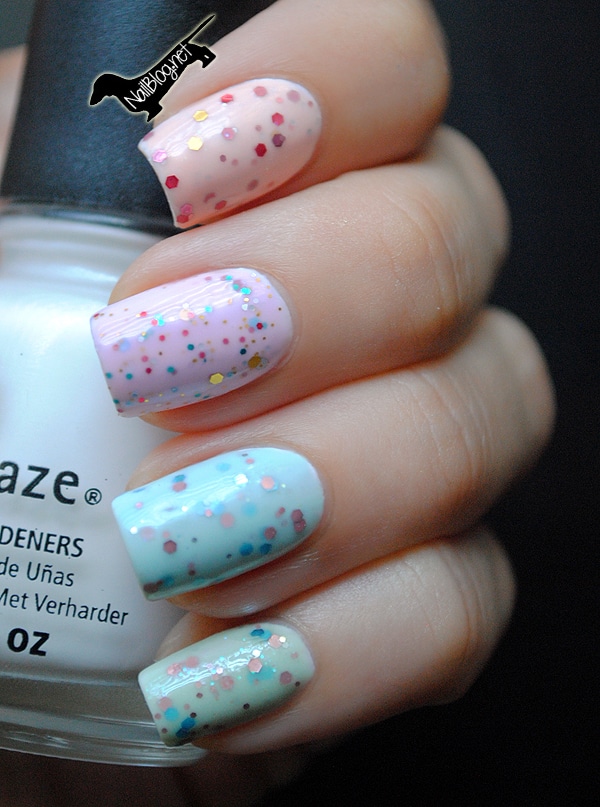 I tried to find some links for you guys but was only able to find miscellaneous ebay vendors.

I did however find a lot of ridiculously adorable things from the TonyMoly company that now make me certain Pickle WAS indeed involved in this company and it’s slogan in some way. I also want everything they think of.

Everything from lip gloss to skin care, and it’s all wrapped up kawaii-style: 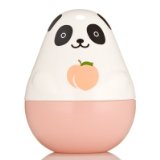 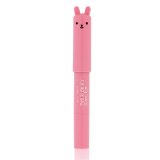