Neither did I until I stumbled across the display at Target a few weeks back. The majority of the colors looked intensely sparkly, all feature star magnet shapes and, while more expensive than other lacquers in the Sinful Colors line at $4.99/pop, they are cheaper than brands such as CG and Sally Hansen whose magnetic lines retail for $9 and up.

So naturally I was instantly drawn to them. Pulled to this line like something that draws things together… typically various types of metal with specific properties… some sort of attraction…is there a word for that? THEY PULLED ME IN LIKE A TOW-TRUCK. Yeah, that’s what I was looking for.

There were a few testers out so with Mr. NB’s help I tested away with high hopes. (You’ll actually get to see the magnificent results of my work and his fingers in this post)

See full swatches & review of this polish along with why I feel this is the only worthwhile one of the bunch, after the jump!!!

In store, I instantly was drawn to a sparkly berry red, a silver with no sparkle, a very deep blackened blue with no sparkle and this polish which was the lighter ice blue of the bunch.

Ready to see how the other polishes did? 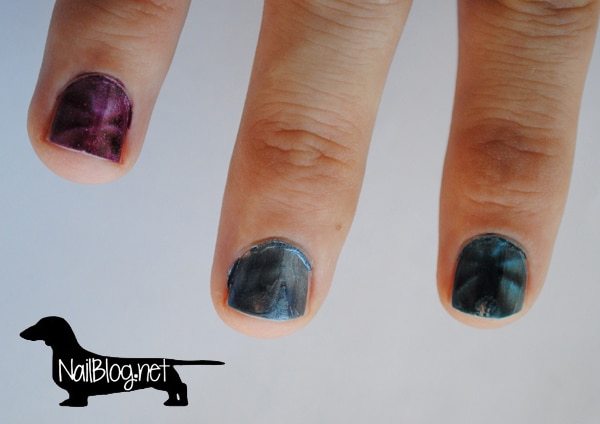 On the left is the berry red with sparkles. I was unimpressed. I tried it twice and both times the pattern, while there, did not show very distinctly.

In the middle is the silver, which ended up with strong blue tones and barely did anything at all. I thought it might be error (plus I then smudged it to show it who’s boss) so I was granted use of Mr. NB’s thumb. 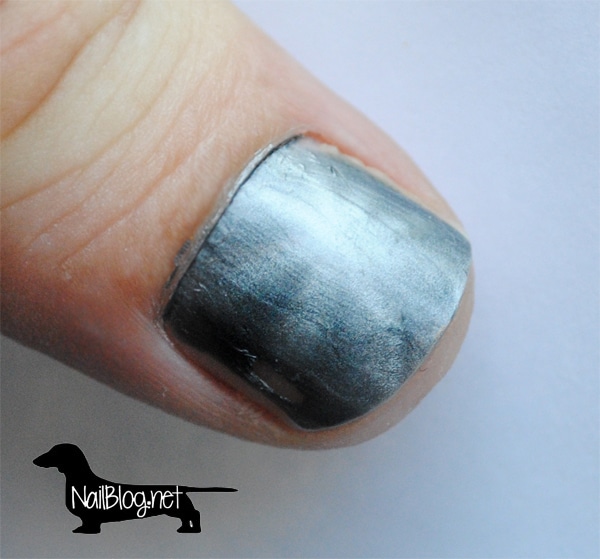 The last polish you see in the first above picture is the very deep blackened blue which actually turned out to be a black teal. This one I loved however after seeing the majority of the results, I chose to only purchase one (the one swatches for this post). At the end of the day it is only the dark teal and “Polar Opposites” that I would recommend from this line. 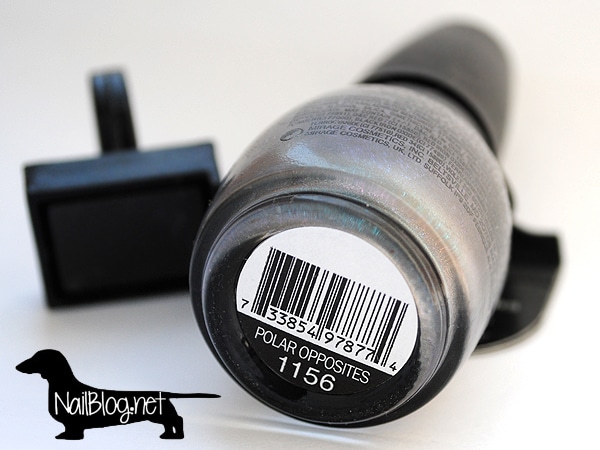 In bottle, Sinful Colors “Polar Opposites” is a silvery, bluish, medium grey silver. It is filled with a turquoise duo chrome fleck that flashes purple depending on the angle. 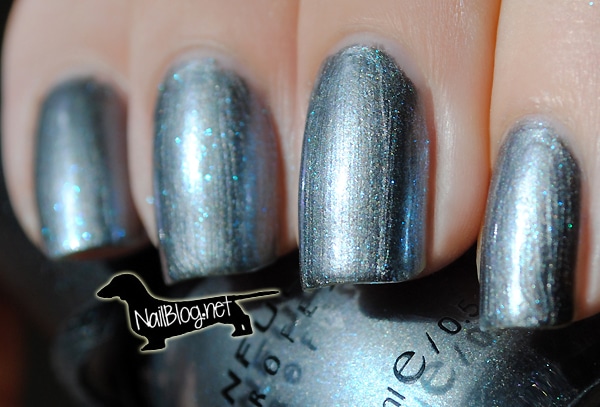 The magnets are only offered in one style (the 8 pointed star) and come glue-dotted to the cap. I had no problems removing the magnet from the cap; in fact they kept flying off the caps in the store while I was playing with them which I’m sure was comical to everyone around me except to the employees who were likely envisioning the possible mess they would have to clean up after my klumsy self left. 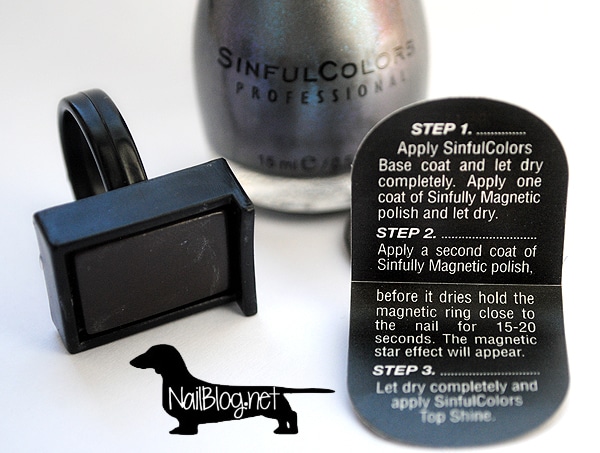 The magnets are square with a resting lip similar to the Nails Inc Magnets. The directions are pretty standard.

So how did it fare?

Well let’s get on to the swatches!! 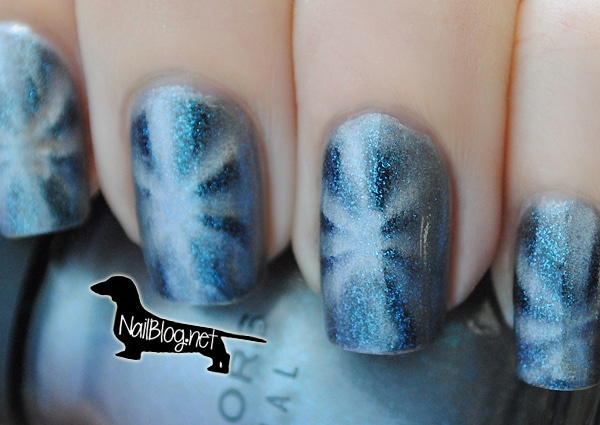 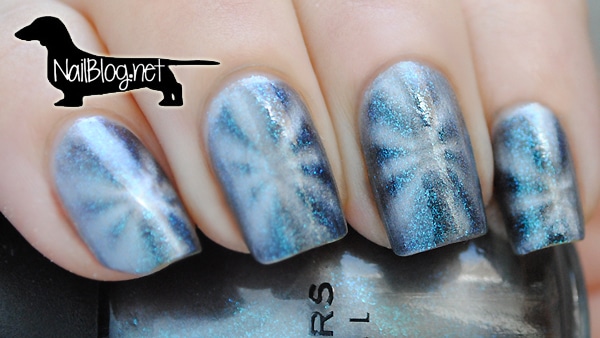 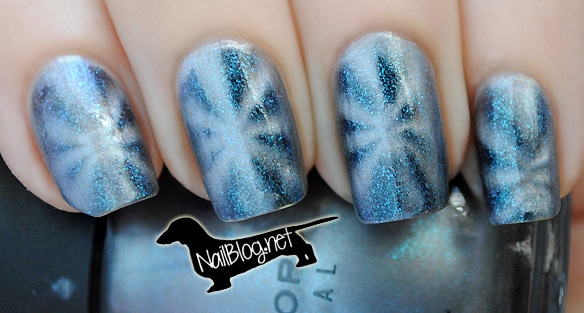 While most star print magnetic polishes remind me of flashing tiger’s eye stone, this reminds me of sparkly gems, blue, winter peppermints!

In Sun, the contrast really pops: 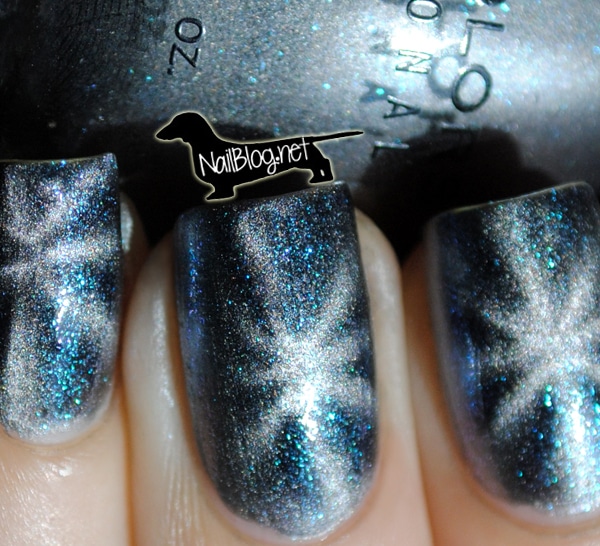 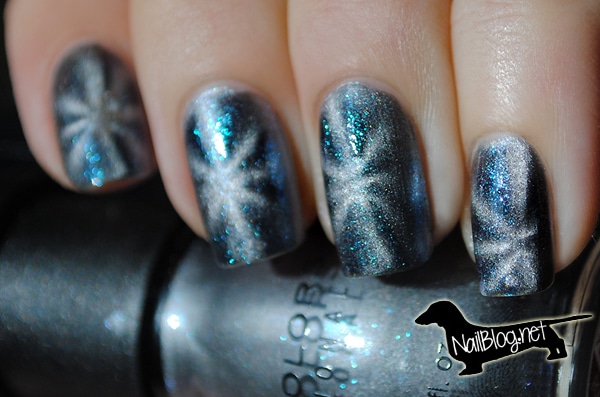 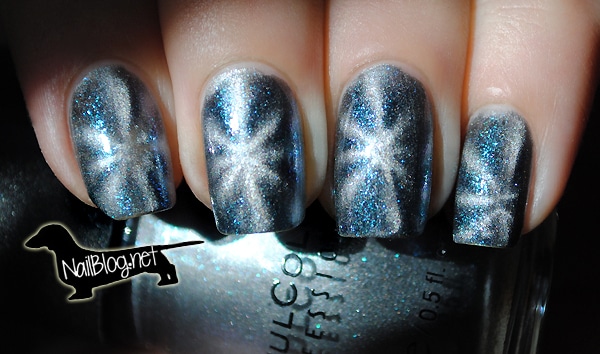 Used with magnets from other brands: 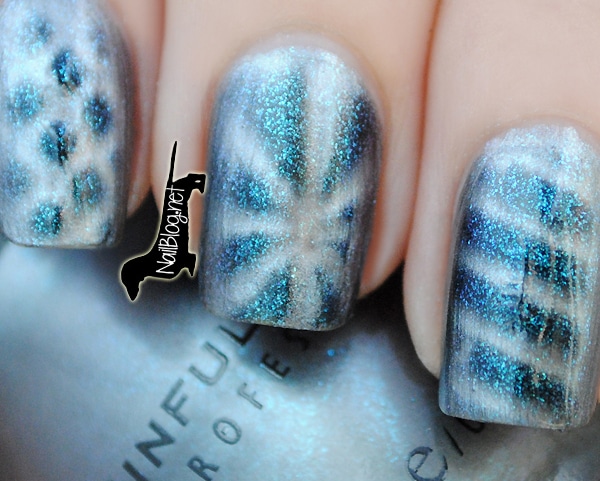 LOOK AT THE FLECKY SPARKLE! 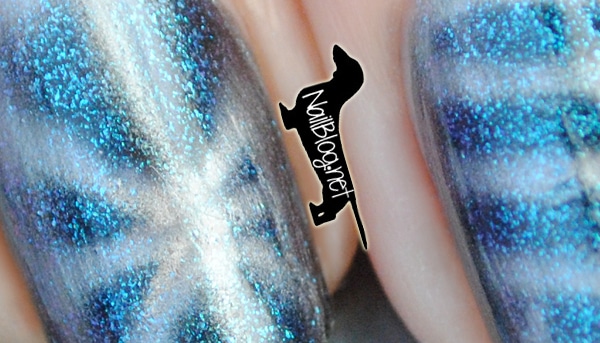 In the right light, the duo-chrome in the fleck translates to nail: 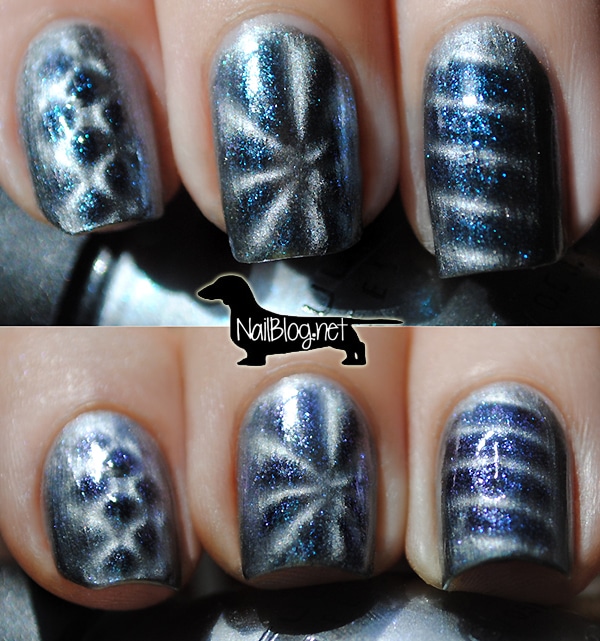 From turquoise to purple

For all swatches I first applied one thin coat to all nails. I then applied a medium coat and immediately placed the magnet over the wet polish while resting both hands on a table, doing each nail like this one by one. I let each nail dry fully – 20 minutes – before applying a top-coat. As a general rule, quick dry topcoats can not be used on magnetic polishes as if the polish is still wet it will streak the design!

One super interesting aspect of the Sinful Colors polish is that the magnet IMMEDIATELY draws the design out. If you look closely, you can see the design practically POP out as soon as the magnetic is placed over it. Pretty interested and different than the other magnetic polishes I have used. So when this polish’s directions says “place magnet over polish for 15-20 seconds” it’s no fib!

Sinful Colors Magnetic Lacquer line can be found at Target as well as various drugstores for $4.99/bottle.

So what do you guys think? Have you seen this line yet? Or had a different experience with the ones that failed for me and think I should give them another try?