If you have followed the KYDA 15ml Glow In The Dark Nail Gel Top Coat since it’s recent debut, you will have noticed how quickly she has sold out (and is about to restock any day now!!) a lacquer called “Day Glow”.

And there is good reason for this.

Get out your glowsticks, sunglasses and house/trance/breakbeat/D&B/electronica/powerpop/glam/halloween music/mad scientist lab/astronomy kit/everything you need to prepare you for the best glow nail lacquer I have ever used. 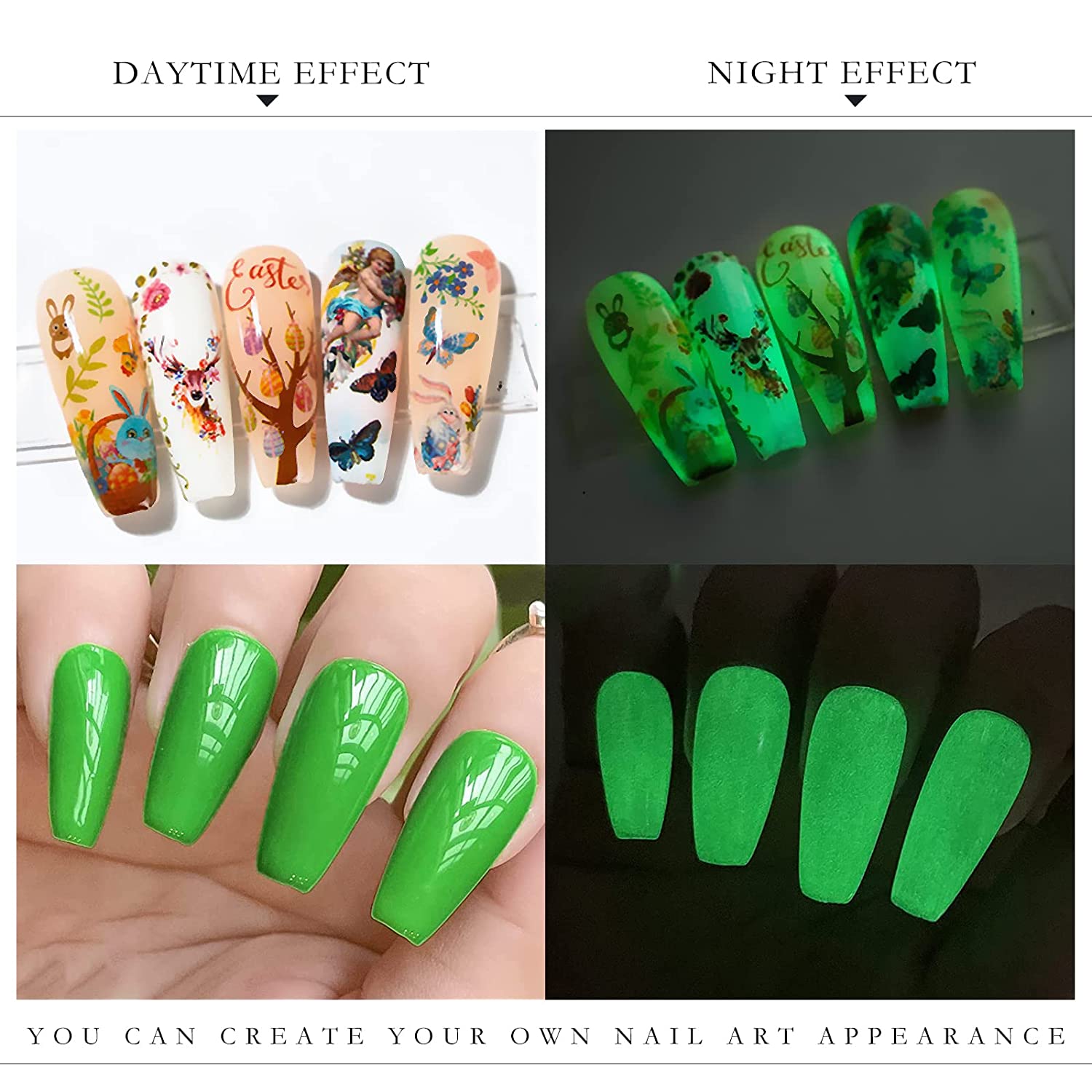 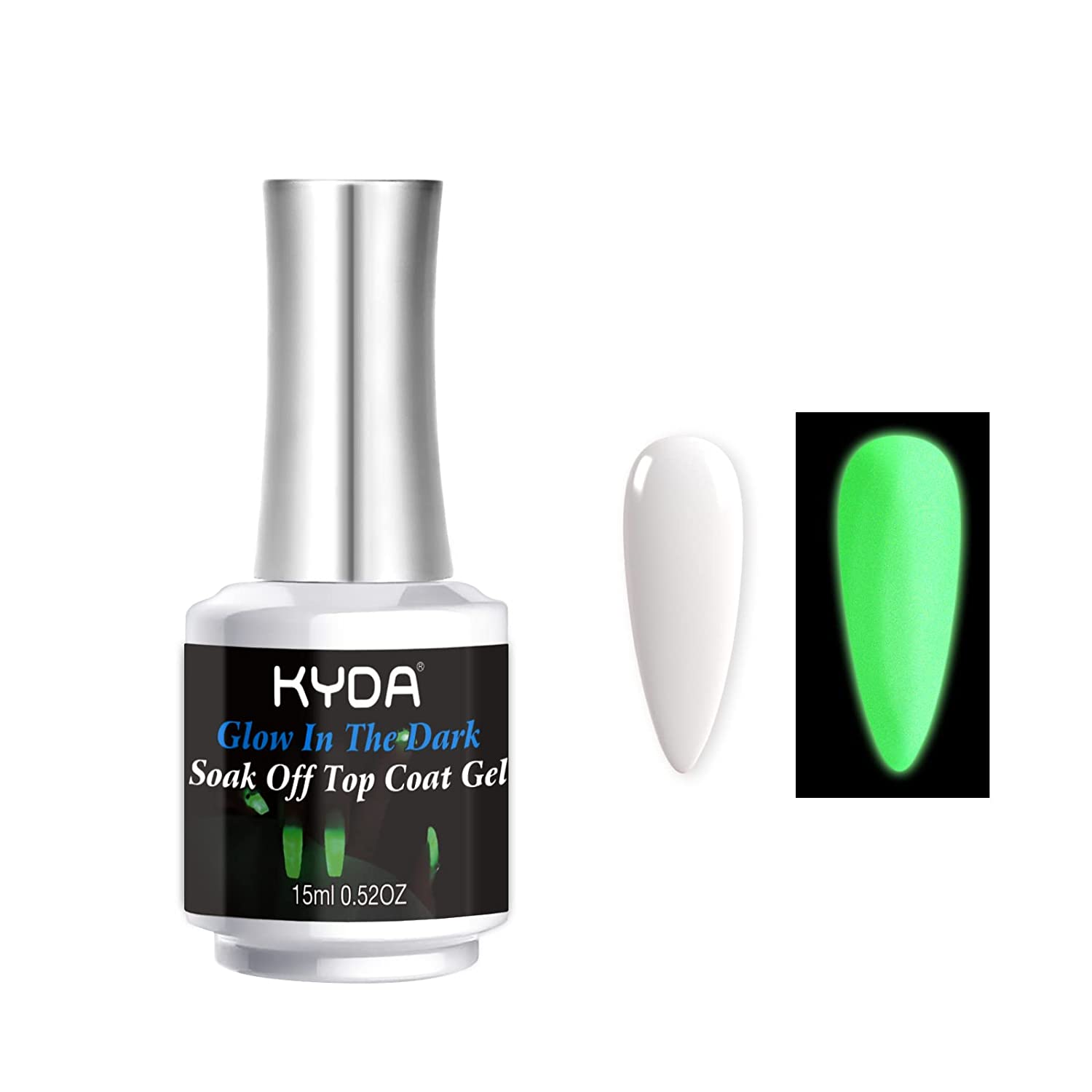 You will want to see after the jump on this one… 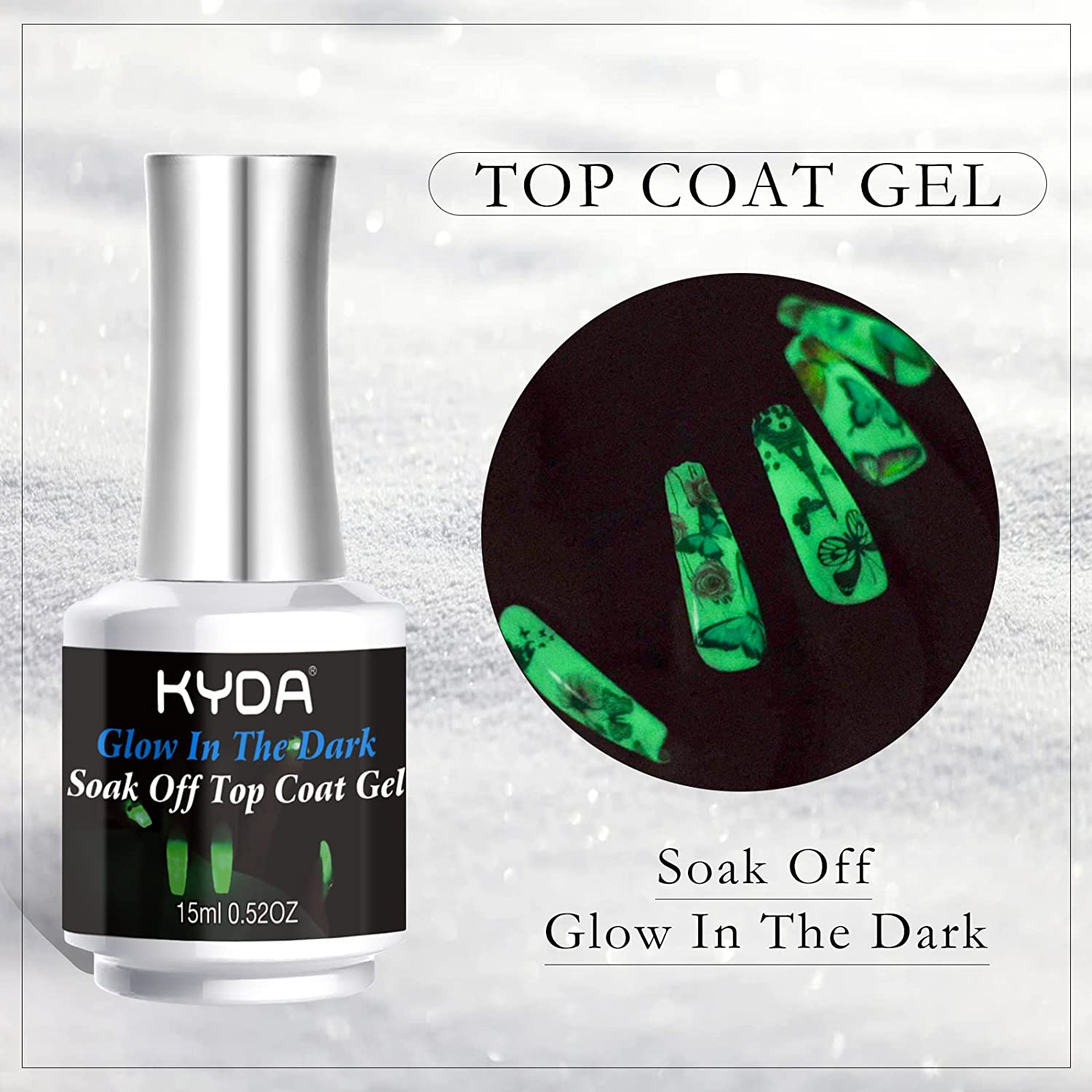 I would ask him to say hello to the rest of the class, but I need you all to put your sunglasses on first.

This little guy was once only offered as a mini. Like many Pokemon who posses his rare abilities, he has evolved.

Now not only is “Day Glow” offered in the small size, but the full size as well!! Glowworms rejoice! …or the opposite. I’m not sure what they use to make this stuff O.O

“Day Glow” is a polish on the thinner side, that dries SUPER, super quick and super matte.

Here is one coat: 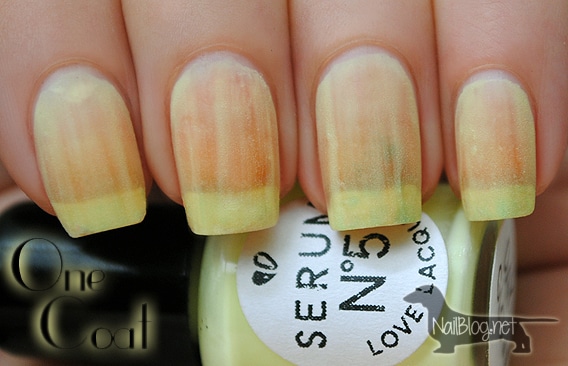 Here is one coat: 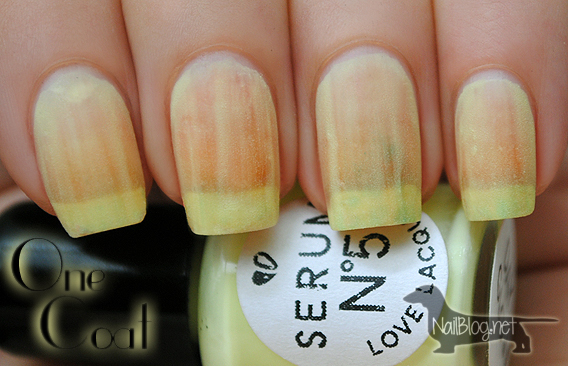 It is super easily build-able which is great being that it’s a yellow base and that builadbility is needed to cover streaks. 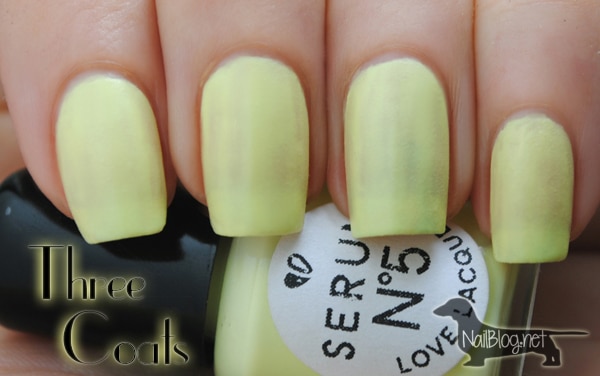 And one thick fourth coat to even it all out: 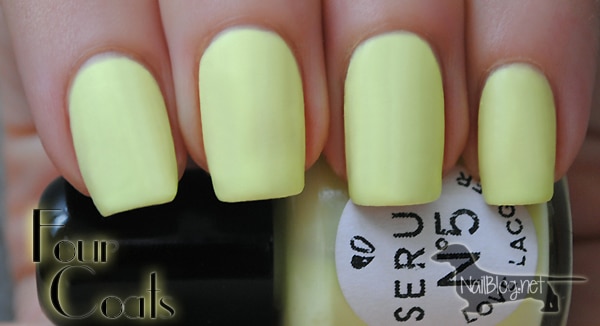 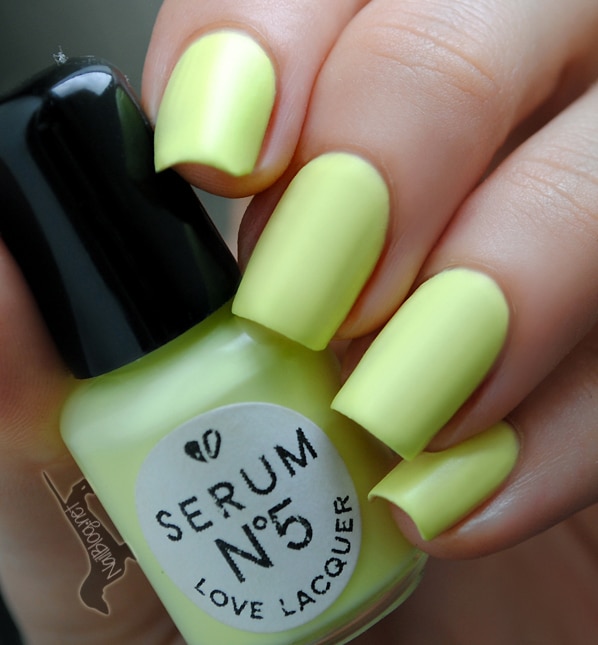 I could see the light!!

(hopefully you can too.. it may be one of those that isn’t able to be captured on film) 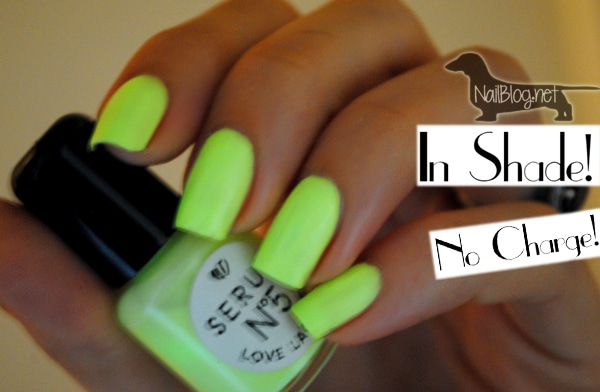 Are you ready for it after sundown? 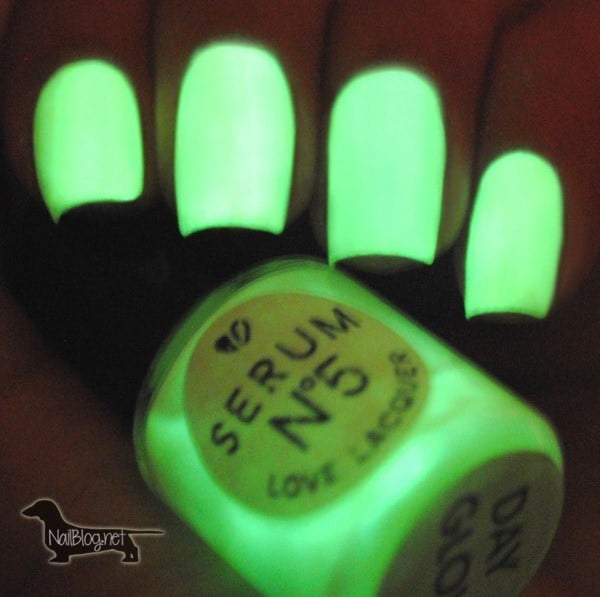 It can get so bright I think this stuff would even protect you from vampires! 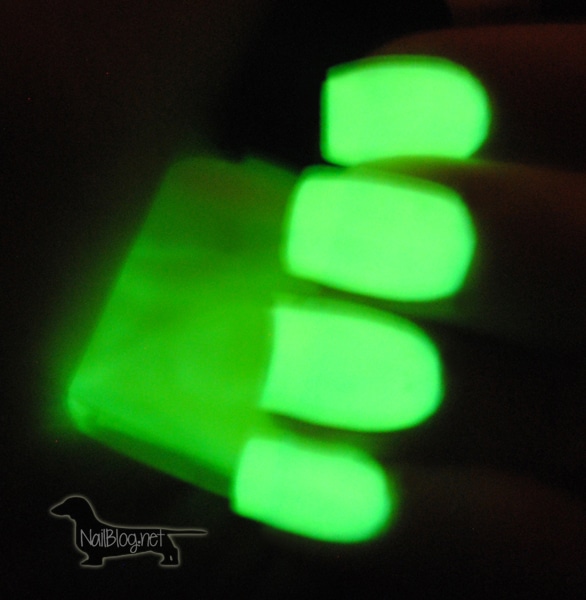 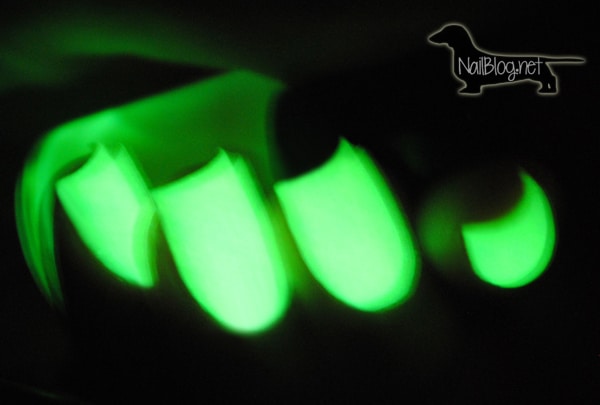 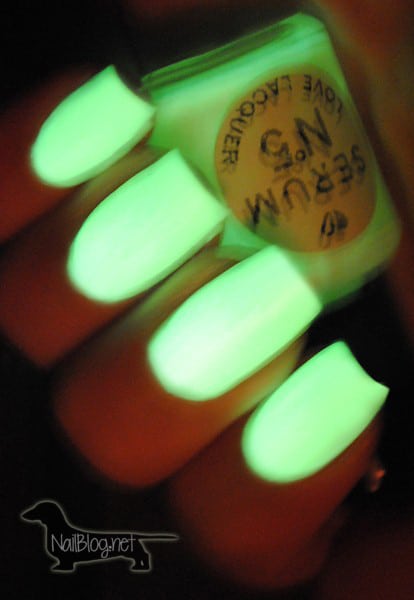 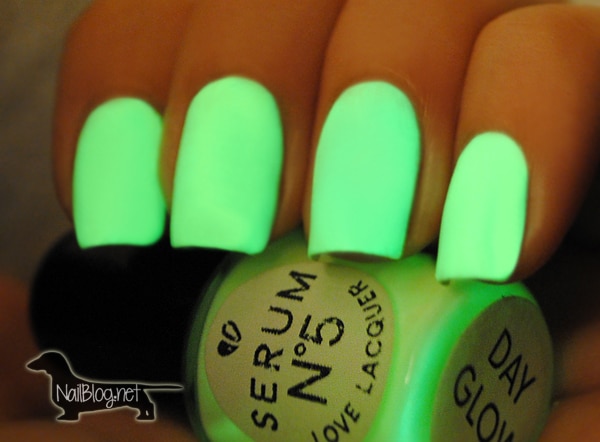 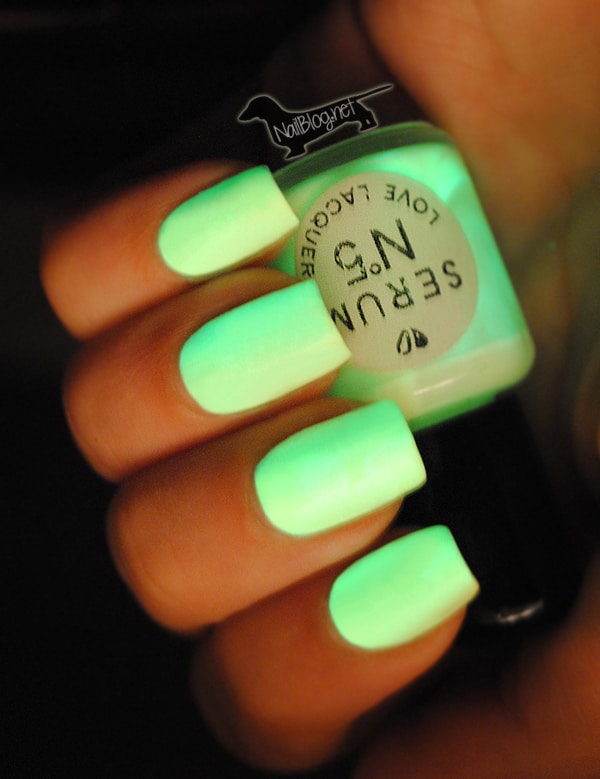 Here’s a little comparison to another Glow in the Dark polish I own.

This is equal coats, equal “charge time”, everything is “equal”.. except for the quality that is.. 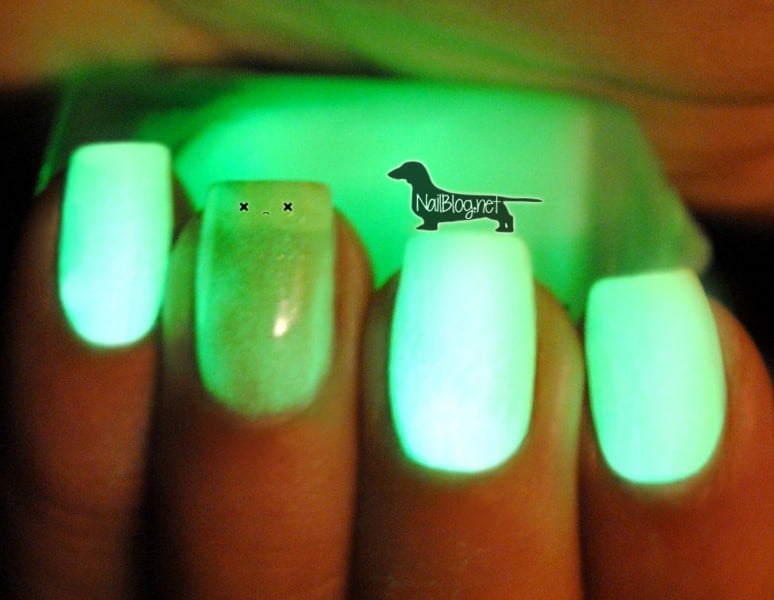 “Day Glow” on my pinkie, middle, and index. 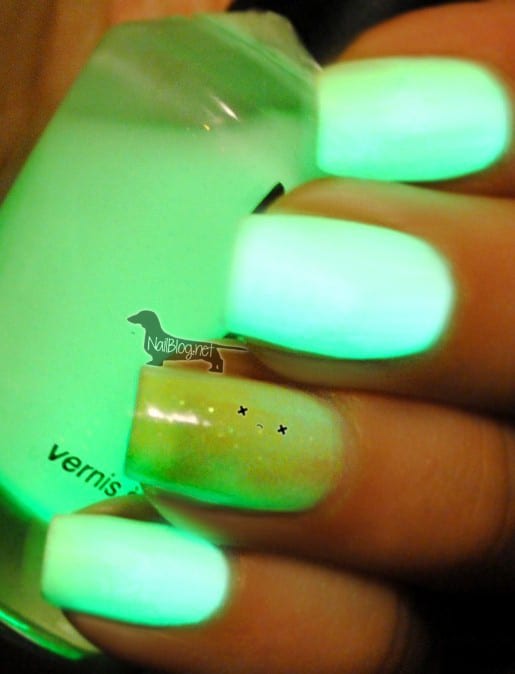 And a little fun with some inspiration from the glow in the dark ceiling stars we all had (or wanted) as children: 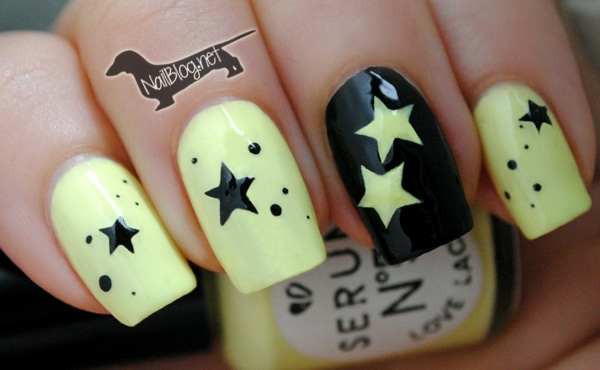 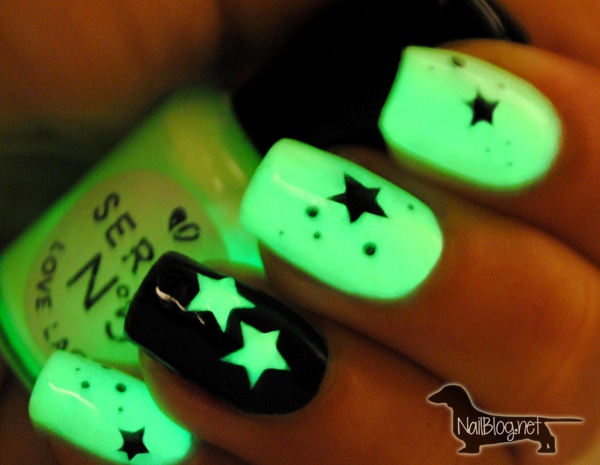 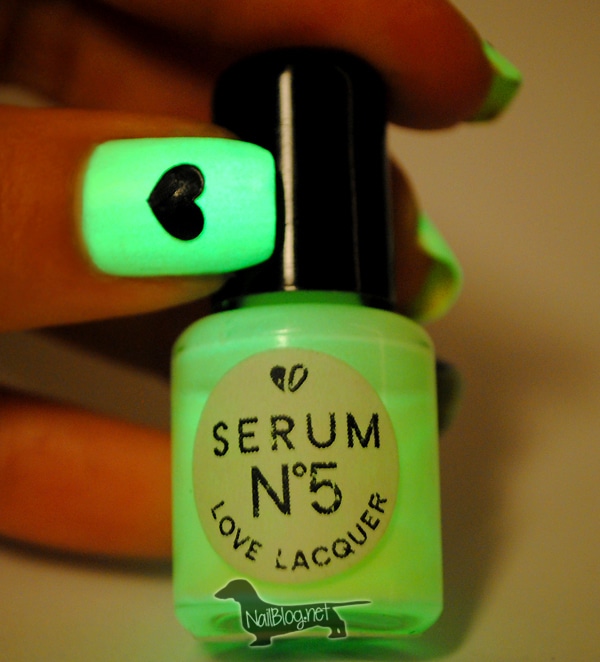 *While every glow in the dark polish I’ve tried takes EONS to dry (from 20 mins to hours), each coat of “Day Glow” dried in seconds for me.

*Crazy, intense wearability. When these first arrived in my mailbox, I instantly put this one on Mr. NB’s thumb. He is such a good sport. I wanted to see how it would wear, and how the glowing properties would fare through that time as well. And who are we kidding, I do NOT wear a polish more than two days. So *obviously* he had a duty and a responsibility.

He wore it for two weeks until he said it was time to get rid of it. In those two weeks, it did not peel nor chip nor show wear other than the obvious cuticle area growth. It also remained glowing until the day I took it off him. Those entire two weeks when it came around bedtime, I would see a floating thumb walking through the room. I should have knick-named it “Headless Nick” or something punny. You know I like puns!

*Simply wearing this polish out and about is enough to “charge it”. No special measures need to be taken (though extra charging does make it blinding).

*It holds its charge far, FAR, far longer than the other three glow in the dark polishes I compared it with.

*Does not need complete darkness to glow!

*Top coats do not seem to affect the properties of the polish. Using both Seche Vite and a basic Ultra Pro glossy topcoat, I saw no change in effects.

Check out the Serum No. 5 shop:

(the above links will open in new windows)

The always super lovely and very creative lady behind Serum No.5 and this blinding lacquer, also donates 20% of proceeds of the entire Serum No.5 line to The Make A Wish Foundation every month.

To see my swatches of other Serum No. 5 lacquers, you can click the picture below!!