I have some Wonder Beauty polishes to show you today!! 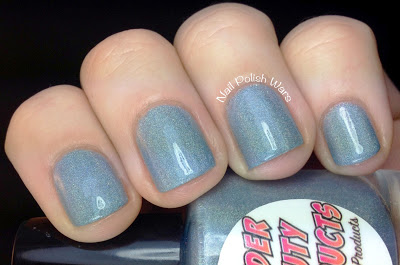 Blue Sterling is a pale silvery blue holographic. The strength of the holo is rather weak. I tried as hard as I could to bring out the rainbow, but I never did see it. The formula was a bit thick and not super easy to work with. It took a lot of doing to get it to apply evenly. Also, the smell for this one is seriously strong, so you might want to keep a window open.
Shown is two coats of Blue Sterling. 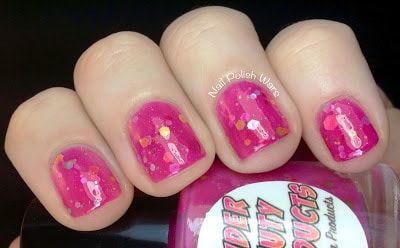 Let’s Play Footsie is a bright pink jelly with multi-sized muted gold, silver, and pink hexes. The formula was easier to apply and actually gave good coverage for a jelly. I didn’t have to fish too much for the glitters either. Again, the smell on this one is very, very strong.
Shown is two coats of Let’s Play Footsie. 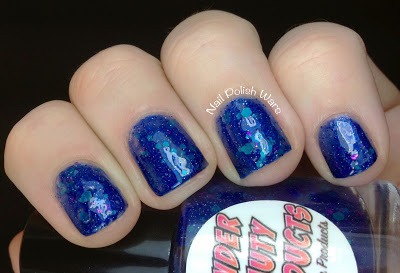 Kismet is a deep blue shimmer with multi-sized teal hexes and pink shards. The formula went on very thick and was not super easy to apply. I also noticed drags of the blue pigment occurring during the application. It was a little difficult to make out the colors of the glitters since the base was so dark. Again, this one has a very strong smell.
Shown is two coats of Kismet. 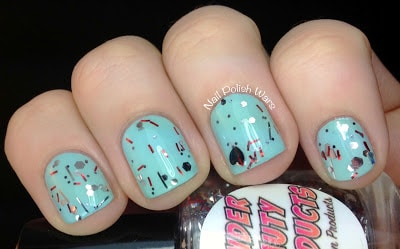 Roxie Hart is a clear coat with red and silver bars, black hearts, and multi-sized silver hexes. The formula was smooth, but the glitter was very sparse and did not come out of the bottle easily. The smell, however, was much less intense than the previous polishes.
Shown is two coats of Roxie Hart over Lime Crime Once in a Blue Mousse. 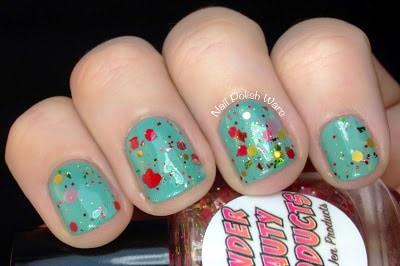 1 Dozen Heart Bouquet is a clear coat with red and pink hearts, green shards, and satin pink, red, and yellow multi-sized hexes. The formula was a bit thick, but not overly difficult to work with. I did struggle with glitter fishing, especially for the hearts. The smell for this one was also less intense than the first three.
Shown is two coats of 1 Dozen Heart Bouquet over Zoya Wednesday.

I hope you all enjoyed these swatches!