I have the Secret Galaxy Collection from Polish Addict for you today!! 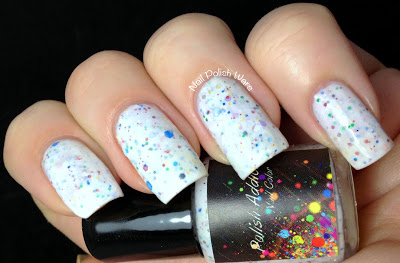 Milky Way is a white creme loaded with multi-sized rainbow glitters. The formula was a bit on the streaky side, and had a bit of a crunchy finish, even after top coat.
Shown is three coats of Milky Way. 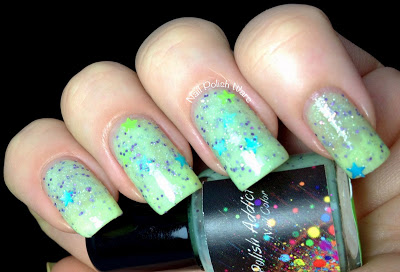 Star Gazer is a sheer green shimmer loaded with silver and purple micro glitters, and bright blue and green stars. Star Gazer is also a glow in the dark polish!! The formula was relatively easy to apply, but is very sheer.
Shown is three coats of Star Gazer. 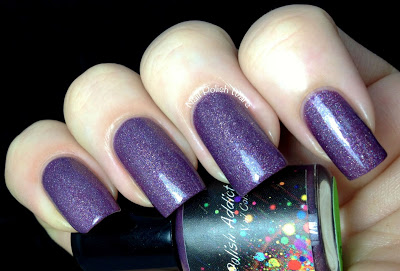 Nebula is a deep plum scattered holographic. The formula was rich and easy to apply. I think this one might be my favorite. The color is muted but vibrant at the same time.
Shown is two coats of Nebula. 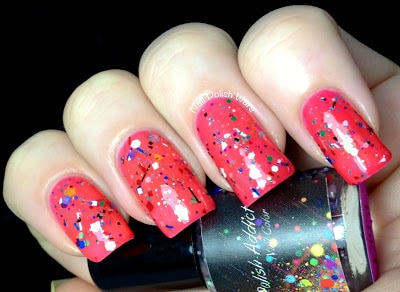 Cosmic Blast is a clear coat loaded with a rainbow of glitters of all shapes and sizes. The formula was smooth and easy to apply.
Shown is two coats of Cosmic Blast over Maybelline Pink Shock. 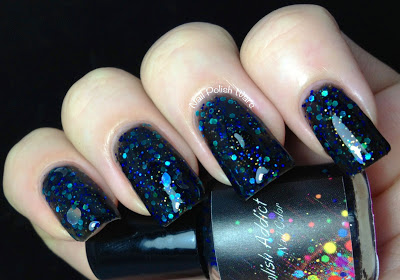 Secret Galaxy is a black jelly loaded with silver, blue, and iridescent glitters, as well as holographic moons, oblongs, and large dots. The formula was a bit on the thick side and took some finesse during the application for a smooth finish.
Shown is three coats of Secret Galaxy.