When I first heard about GOSH Holographic Hero nail polish, I’m not going to lie, I didn’t know what all the fuss was about as I hadn’t had the older version.

Then I saw a photo. I was SOLD.

Two weeks of daily Superdrug visits later and I was getting more and more frustrated. WHY was it not in stock anywhere?! Not even one of the shops I went into had even HEARD of it, let alone had it in stock. I was gutted, and about to give up all hope of ever having pretty sparkly fingers again.

Sunday came and my boyfriend and I were off to Hertfordshire for his mom’s birthday. On the walk from the station to his sister’s house we happened upon another Superdrug. My eyes lit up immediately and my boyfriend watched as I turned into a crazed mad woman before his eyes, dragging him into the store at full speed. I made a beeline for the GOSH stand and was gutted that I couldn’t see it lined up with the special polishes, but as my eyes glanced down to the ‘normal’ polishes I saw a flicker of RAINBOW. There it was. Like a rose between thorns.

The rest is history really. I bought the polish (while telling every nearby member of staff how excited I was to have found it) and was a happy person for a WHOLE day. 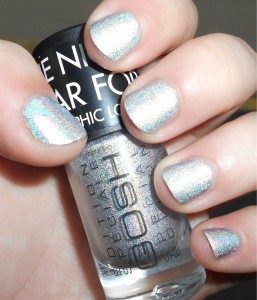 After arriving at my boyfriend’s sisters house I was desperate to try the polish out but didn’t want to ruin my current manicure so forced my poor other half into having one of his nails painted and consequently he suffered an afternoon of mocking from the gentlemen of the family. But it was WORTH IT. The polish looked super shiny on his nail in the sun (wasn’t it a beautiful weekend?) so I knew I just couldn’t wait to try it on myself.

After work last night I insisted on painting my nails with this shimmery polish and it was really quite a surprise. You can’t use a topcoat, but that doesn’t really bother me too much. The polish has almost a matte effect and doesn’t feel glossy to touch when dry which is really deceptive as it is SO SPARKLY. In the sun or in bright lights this polish really does work magic, but in low lights or the shade it looks quite silvery. On the train this morning that was quite a disappointment, but I was immediately cheered when I arrived at work to be reminded that I sit under a bright light and could spend the whole day having them catch my eye…

The polish states on the bottle that it is a ’24hr’ polish, meaning that you may not be able to wear it for long as it has a tendency to chip, but I’ve been wearing it for around that time now and it is showing no sign whatsoever of chipping.

This is my first holographic polish and it definitely won’t be my last.

For the manicure I used: