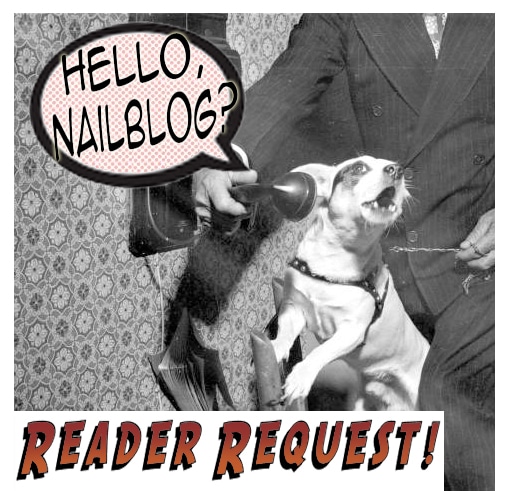 Recently, the lovely Anne stopped by the blog to check out one of my post popular posts (I don’t understand it’s incredible popularity on Pinterest!) 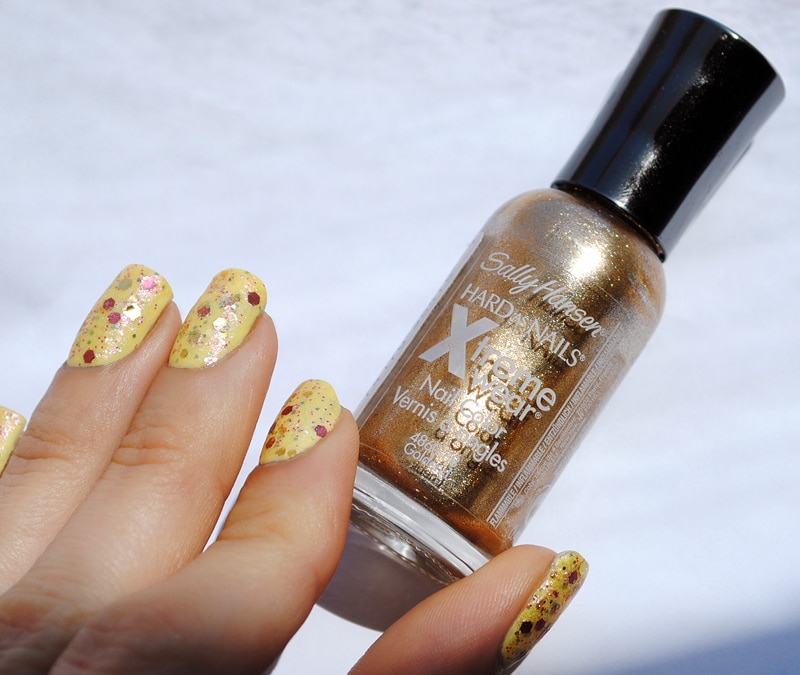 SEE MORE AFTER THE JUMP!!

Before we go any farther, I need to warn you there won’t be many pretty pictures in this post. It was entirely spur of the moment which meant I did not have much choice in lighting (the sun definitely calls the shots here in Arizona at 3pm) nor did I have any prep time such as cuticle oil and any other nice fluffy jazz.

I also want to warn you that the questions Anne had awoke the art student in me. So I probably will go much too far into detail and offering far too many unnecessary ramblings. I can’t help it however, her interest got me so excited! Yay art, paint, texture, wavelengths, pigment, colors!!! WOOOOO!! Don’t worry, I’m not going to start stripping off my clothes. Even though I want to.

How did you manage to get them like that? I googled other peoples swatches of Sally Hansen Xtreme Wear Golden-I and they looked nothing like this! Does it look the same IRL? Have you boosted the colours a tad in the photos maybe?”

I’m not going to post anyone else’s swatches here, but a search for “sally hansen golden-i” through Google can pull you up a few. From what I found, on today’s date, the few sporadic pictures Google’s spiders pulled were not what I consider to be super accurate. Not only that, but GoogleImages was also pulling “sally hansen golden child”. Damn you, skynet. I know your angle.

But this got me thinking, not just about this polish in particular, but metallic nail polishes in general.

We all love jewelry, be it gold or silver or both. It seems the next logical assumption would be that these same metals worn as lacquer would be bitchin!!! …But…cue Price is Right’s wrong guess clip…In reality, this is rarely the case. Why? Well, throwing all technical knowledge aside, there’s the nightmare of brushstrokes, the impossible to duplicate reflection, and one just can’t easily replicate the transitions metals exhibit through various lighting.

Which brings me to my first show and tell!

Lighting. Lighting is one of the very most important aspects when photographing a nail polish. This is the reason I always use natural light, and on the rare occasion I use anything else will specify as to such. I believe it produces the truest colors. I have read a few blogs where people who spend the majority of their time in offices disagree; which I can totally understand. Many people want to see how their polish would look in the settings they find themselves in the most. I, personally, am not one of them. Holographics, for example, I couldn’t care less that they are little fickle light-eaters. *I* know what’s on my fingers, what it looks like in it’s truest form, and that even ups the ante a bit by transforming it into a small personal secret. Inside knowledge. *shifty eyes*

If you’re on Pinterest (and if you are, why haven’t we followed each other yet?! http://pinterest.com/nailblog/) then by now you must have seen this picture:

WARNING, I’M PROBABLY GOING TO SKEEVE A FEW OF YOU OUT, AND QUITE POSSIBLY TURN OTHERS OF YOU ON:

but.. this isn’t polish. It is currently impossible to create a metallic polish that gives these result. These, for those unaware, are nail stickers. I believe the current most popular gold and silver nail stickers are made by the company “Minx”. So, if you’re looking for a polish that’s going to give you these types of results, especially indoors? I’m sorry to say that unless we can get Tony Stark to bring in his basement-invented “easy bake element oven”, it’s not going to happen in 2012.

And if I get Robert Downey Jr in here, it’s not going to be to have him make me nail polish. If-yah-know-whatti-mean.

ON TO more PICTURES!On the left is a picture of “Golden-I” in full, natural sun. On the right, the same bottle literally just two feet away on the same windowsill where it now sits in shade.

Nuts, right? This is one reason why metallics just aren’t as good in real life as they are in our hearts and minds.

Continuing on the subject of lighting, another important aspect to keep in mind is that lighting in the form of shade given by windows will cast blue tones. These tones will be picked up by a camera and will cool down everything in the photograph. To top it off, super reflective colors pick up colors from what’s around them.

Look how white and washed this polish becomes as I use the reflection of a piece of copy paper to counteract the curvature contrast:

This picture was taken away from the windowsill, in the middle of the room, where it’s light source was natural shaded sunlight. See how cool toned everything has become? What should be the white of the paper in this picture is the perfect reference point to use when looking at the tonal values. The same principal applies on the opposite end of this spectrum when using artificial light. Most artificial light casts warm tones.

Another incredibly important aspect when it comes to metallic polishes is the number of coats used. Due to their reflective properties and all those sparkly little particles, it’s easy to over-estimate the amount on the nail.

This is just one coat, photographed in both sun and shade. If this were any other polish, it would be obvious how sheer it is and yet, with how much reflection our eye picks up, it looks pretty dense doesn’t it?

Ahhh, now we’re talking. In comparing the two, you can see how much denser and more saturated the color is becoming. It’s my personal belief that metallics don’t reach their full potential until at LEAST coat three- regardless of brand, formula or quality.

In reference to the particular look Anne was asking about, some other aspects should be touched on.

The color coral. Oh Lordy. Coral spazzes out cameras in the similar way neons and purples do. Whenever I am able to afford a proper macro-lense, the purchase after that will be to look into professional photography equipment that helps photograph these types of colors with ease.

In the particular look of NOTD Coral dipped in Gold, what’s underneath the polish needs to be considered as well. These effects may be absurdly subtle, but any polish -any anything- you have underneath your top polish is going to have some effect on it’s final result.

I hastily painted the left half of my thumbnail with coral, topped with just one coat of “Golden-I”:

Is there a difference? I’m really not so sure but it could be resulting in more red tones.

I have yet to wear this gold on it’s own as a full manicure, but I did walk around with my eyes on my thumb for the past hour throughout my apartment complex. It must have changed into about 100 different shades throughout that journey. Monitors vary and unfortunately due to that I can’t be 100% sure what is being seen on the other end BUT I can say that what is shown on mine is true to life.

Oh, and as soon as they come out with what I consider to be a TRUE gold and/or silver lacquer I’ll be the first to buy every single one of you a bottle! Hold me to it. Especially you, Robert Downy Jr. You can hold me anytime.

I currently own about four gold polishes (including the Chanel everyone says is so fantastic). I am waiting on obtaining a few more, specific ones I already have in mind, at which point I have a “Gold-a-Thon” planned. Something I’ve been planning to do since starting this blog! I know what the search is like for a good gold polish. At least, I know I always have a very specific vision in my head as to what it should look like and it’s a hard thing to find.

Thanks for the comment and question, Anne! It’s unnatural how much fun I have doing Reader Requests and getting to interact with other lacquer-heads.

If you have a favorite gold nail polish, please let me know! I’d love to include it in the Gold-a-Thon.