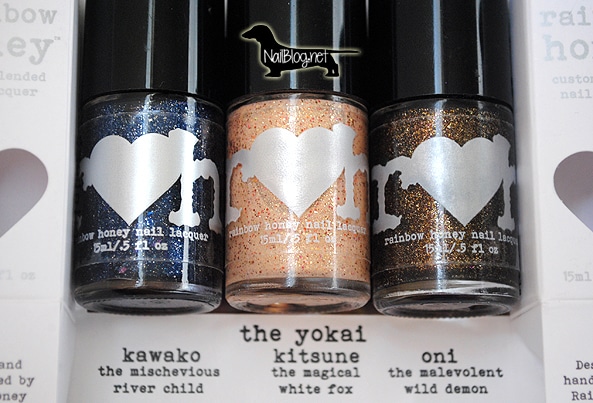 Right out of the gate I want to apologize for my little nubby nails. I put off this review for as long as I could hoping to get any extra growth in that I could which didn’t work too well but c’est la vie!

I was so excited for this collection for a few reasons:

Yokai is a spirit or strange apparition in Japanese folklore, what would be considered supernatural and sometimes classified as demons depending on who’s doing the classification. The word Yokai translated directly from Kanji means “weird” and “otherworldly”.

Like most folklore, especially Japanese folklore, Yokai is a title assigned to a huge slew of different spirit types. They can be what we would describe as sinister and malevolent to those that are fun, bringing good fortune. Typically they present themselves in animal-like forms, however one can stumble across the odd umbrella or two (not kidding). The majority posses shape-shifting abilities.

Many Yokai characters are [hilariously] specific. You may have heard about Azuki Arai, a yokai who is always found washing Azuki beans. Or perhaps you happen to have had the recent fortune of coming across a gigantic foot apparition in your living room? Not yet? Well if you do, his name is Ashiarai Yashiki and he will demand that you wash him.

One of my favorite movies to recommend is any of the “Yokai Monster” movies. They are seriously so much fun, especially if you enjoy movies similar to traditional Godzilla films.

How could you NOT want to see what those are all about?!

The most commonly known of Yokai is the Oni (especially made popular by tattoo parlors).

Oni can be described as a type of devil, usually depicted with horns and an open mouth filled with fangs. Oni are traditionally red, black, brown and blue (blue!)

A few pictures out of a favorite art book of mine

By the amazing artist Hori Mouja.

(This particular book contains both Oni and Hannya, which are practically interchangeable visually. Hannya masks typically represent a woman-scorned/jealous-turned-demon. This is one of those ever confusing conditional statement situations in which Oni are not Hannya yet Hannya can be Oni)

“Oni”, The Malevolent Wild Demon, is described by Rainbow Honey as:

“Let’s be honest, Oni are generally depicted as wicked and hideous. Our “Oni” may be wicked and supernatural, but with its myriad of glass flecks and multi-chromatic shimmer it is hard to call it hideous. In fact, the consensus seems to be that it is one of the most beautiful and intense polishes out there this fall!”

You’ve heard of glitter-bombs; well “Oni” is a fleck-bomb. With a very deep blackened-brown base, it is filled with multi-chromatic shimmer, gold and purple flecks.

This polish has phenomenal coverage, covering in two coats, however; I believe three make it look it’s very best.

The following swatches are of 3 coats “Oni”, 1 regular Ultra top-coat:

Ready for insane beauty? Check out the purple and red pop!

Next out of the collection is..

“Kitsune” can refer to your ordinary red fox, but our “Kitsune” is a glorious nine-tailed creature: fiery, wise, and absolutely gorgeous. In a cream base full of gold shimmer and flecks you will find an array of glitter in a bonfire palette, ready to spark a fire in your heart.

Kitsune can be translated directly into the word “fox”. In folklore, there are typically two types of Kitsune. One, known as “Zenko”, are known to be “benevolent, celestial foxes”. The second type, known as “Yako”, tend to be ” mischievous or even malicious”.  Kitsune are typically gorgeous supernatural foxes possesing nine tails. Be jealous, pokemon, be jealous.

A greater number of tails signify an older, wiser fox. From wikipedia: “some folktales say that a fox will only grow additional tails after it has lived 100 years”! Once a fox gains it’s ninth tail it’s fur will turn a mystical, bright golden white. 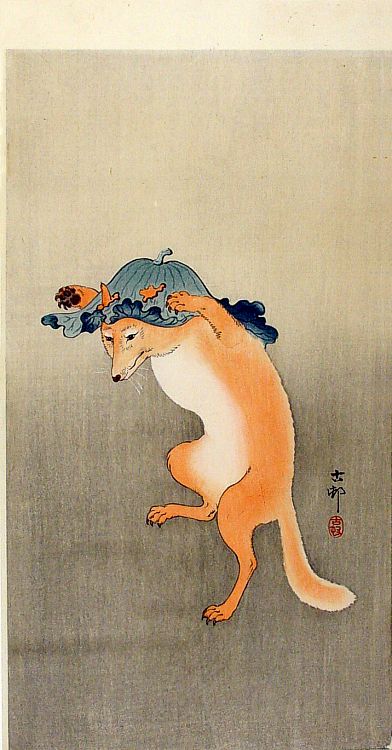 Common belief in medieval Japan was that any woman encountered alone, especially at dusk or night, could be a fox in human form.

I found this particularly amusing: “In some stories, kitsune have difficulty hiding their tails when they take human form; looking for the tail, perhaps when the fox gets drunk or careless, is a common method of discerning the creature’s true nature.”

When I unwrapped “Kitsune” I literally gasped. In bottle this is the most gorgeous little potion I’ve ever seen. I also commend Rainbow Honey for not going the predictable route and using a pure white base for this polish.

and a shaded shot to show you the flecki-goodnesss:

There are a few swatches out there that make “Kitsune” look very textured and lumpy. This polish is the thickest of the three and it does need to be applied in thinner coats than it’s companions. Despite needing to use more careful applications with “thinner” coats, it provides full coverage in just three coats and if done this way it results in a perfectly smooth application and finish.

Kawako, whose direct translation means “River Child” is also known as a water spirit or river boy. I immediately thought of “Kohaku” from the movie Spirited Away and wondered if that is where his character’s name came from. Is it possible that the Kohaku river is some how related to Kawako as some derivative…? Either way, Kawako as a Yokai, otherwise known as Kappa, can be quite the character…

Water Yokai are typically found in ponds and rivers, even man-made house ponds. They are said to smell like fish and possess web toes and hands to aid them in swimming. They are typically depicted as possessing a frog-like appearance and being around the size of a human child.

“Although their appearance varies from region to region, the most consistent features are a carapace, a beak for a mouth, and the sara, an indentation on the top of their head that holds water which is regarded as the source of their power. This cavity must be full whenever a kappa is away from the water; if it spills, the kappa will be unable to move or even die in some legends.”

How’s this for character range:

“Kappa are usually seen as mischievous troublemakers or trickster figures. Their pranks range from the relatively innocent, such as loudly passing gas or looking up women’s kimonos, to the malevolent, such as drowning people and animals, kidnapping children, and raping women.”

and a few more interesting facts: “It was believed that if confronted with a kappa there were a few means of escape: Kappa, for one reason or another, obsess over being polite, so if a person were to gesture a deep bow to a kappa it would more than likely return it. In doing so, the water kept in the lilypad-like bowl on their head would spill out and the kappa would be rendered unable to leave the bowed position until the bowl was refilled with water from the river in which it lived. If a human were to refill it, it was believed the kappa would serve them for all eternity”

“”Kawako” is our interpretation of the Kappa, depicted as everything from a water sprite to a river demon. Erring on the gentler side, “Kawako” is full of gorgeous silver and ice blue shimmer, with the occasional iridescent blue flake.”

Kawako is that rare, dark, rich polish that contains fleck pieces that actually manage to remain 100% strong, vivid and uncovered by the base. It is GORGEOUS. Imagine a dark piece of the semi-precious stone Lapis Lazuli simply covered in flecks of golden pyrite and mica.

In bottle the polish contains a hearty helping of large multi-colored shreds, however these become pretty subtle once on-nail.

All swatches are of 3 regular coats “Kawako”, with 1 regular Ultra topcoat:

And in pairing it with Serum No. 5? One giant yokai disco blizzard, baby.

And lastly remember those umbrella Yokai I mentioned earlier?

Tsukumogami are an entire class of yōkai and obake, comprising ordinary household items that have come to life on the one-hundredth anniversary of their birthday. This virtually unlimited classification includes:

(straight from a yokai movie)

The promo pictures Rainbow Honey shot for this collection (seen on the RH Facebook (http://www.facebook.com/rainbow.honey.cosmetics) and RH website) are to die for.

As always, Rainbow Honey continues to fully impress and fully own my heart. This brand remains a top favorite, and the creative mind behind the line continues to amaze (and rock harder than a geologist convention).