Today, thanks to one of my favorite commentors, I have decided to post a few of my swatches of the OPI Spiderman Collection! They’re just been waiting around for me, and I think it’s overdue.

First, the back-story to make you lacquer-envious! I had been hunting this collection since well before it even came out. Superheros? OPI? The polish “Just Spotted The Lizard”?? Nailblogasm. Unfortunately I wasn’t having any luck. I would read someone recant their tale of finding it at Ulta, only to go in and have them tell me I was early. (Oh but they have them all in the back and this counter lady gets to “play with them and even take the collection home early and oooo it’s so amazing”. (Make note to Pickle: train to attack on command.. maybe become a cat burglar while we’re at it).

But, in maturing through life’s trials, I have become a relatively patient person. So I began to simply happily count the days, checking in at retailers every now and then. Then… fire..brimstone…pain..hurt feelings..money trouble..horrible day gone wild! And so what happened?

Mr.NB came home from work with the entire collection, including the shatter, to cheer me up. (And it’s not as if we have a bunch of extra money.) 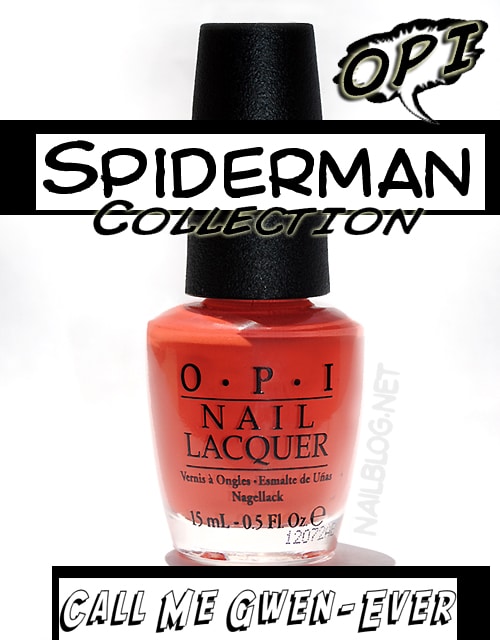 One of the colors chosen to represent Spiderman and the release of the upcoming new rendition of the comic, is the orange you see here.

I’m not going to say I’m not a judgmental person because, c’mon, everyone judges. I try to judge everyone as good, as deserving of love, understanding and all things positive. (That’s what I believe “not judging” really is- it’s not a license for people to escape personal responsibility, it’s attempts to judge our world positively!) But I will say this: It bugs the living hell out of me when I see nail polish colors being labeled (what I consider to be) incorrectly. Maybe it’s that same art student in me I’ve wrote about before. For example, I’ve seen this polish described as coral.

this is not coral. It can be described as having coral-ish undertones, but to say it’s a coral shade is inaccurate.

this is not bright, it’s dusty. dirty.

So what’s a person to do with all of these face palms? Turn them into high fives with my delusions of grandeur in swathing them for you today, that’s what. Or simply replace my face with someone else’s while face palming.

Does it belong in the “Spiderman Collection”? Initially, I felt the answer was a strong resounding yes. Which is more than I can say for the majority of this collection. After seeing it in person? Meh. On my nails it is a very fall-ish color. It is dusty, orange, even a little burnt. I can see why people leaned the coral direction (if I put myself in the shoes of prolonged episodes of overwhelming intoxication) as it’s not simply a straight-forward orange with yellow undertones- quite the opposite actually.

In consulting a universal shade chart so we can all finally pin it down once and for all, using these words to best describe it: If a dusty tangerine and a burnt carrot had a baby who was then adopted by a Princeton Orange.

Another interesting revelation was that, despite doing a google search and finding no other blogs mention this fact, it’s a little streaky!

I did a full mani using my manicure and pedicure tools with this one and this is what I found:

On my left hand, I have more staining (I’ll forever be rebellious against base coats). These stains are dark, and blue. Painfully obvious. On my right hand, no stains. I broke some nails so they are short little stubbers but aside from that they’re little baby bottoms. I believe it’s due to the staining that i was able to see how streaky this polish can be. Two coats- streaks. THREE coats- streaks. FOUR COATS?!? Well, it’s satisfactory at least. In painting the stain-free nails of my other hand, I can only see the streaks because I now knew to look for them. If my left hand’s stains hadn’t made me aware of it, I don’t think I would have noticed at all! So be warned. Have stains? This polish will mock you all the way until coat four.

The color changes from bottle to nail as it’s about four shades darker and dries a little more burnt. It also seems to change quite a bit according to the light it is in. I photographed using many different light sources on two separate occasions to bring you pictures of it in several settings.

I tried to do some fun, funky things but….well look for yourselves:

I had thoughts of this gorgeous outfit I saw on Pinterest that involved orange shorts and pastel purple heels. Two coats of Lynnderella “Lavendear” is on my ring finger.

Nicole by OPI “Snow-Man Of My Dreams” actually looks pretty interesting paired with this color, however.

And, one of the absolute best Pickle photo-bombs to date! She may have her superheros a little mixed up as this would be called pulling a Superman, however; considering the fact that she’s a DOG, I don’t think anyone can take points off.

So, what do you guys think of this orange? Does it belong in a superhero collection?