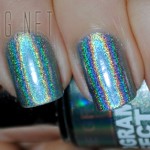 In THIS post (link will open in new window) I swatched and reviewed Layla Hologram Effect Holographic Nail Polish in “Jade Groove”.

I  did more than hint at a future comparison post and.. 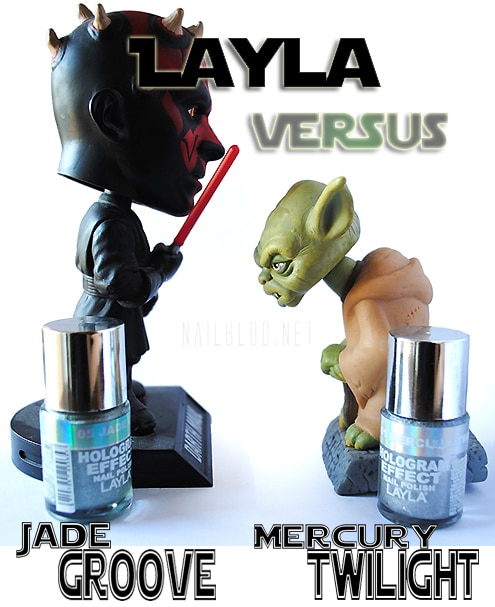 (Yes, I have a ton of fun on this website)

I think I’ll start it off with a picture sure to tantalize: 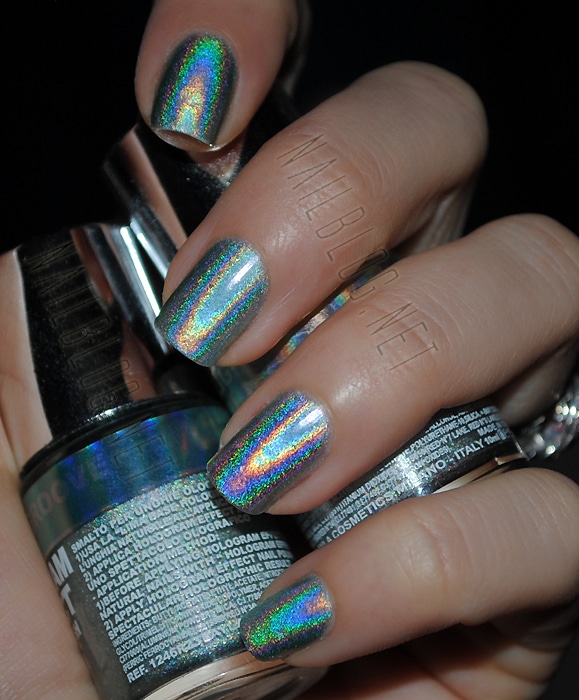 See more pictures and breakdown after the jump!

In the above picture Jade Groove is shown on index, middle and pinky. Mercury Twilight is on the ring finger.

Jade Groove is supposed to be a jade color linear holo, Mercury Twilight is supposed to a true silver linear holo. There are slight differences that can be seen to the naked eye, however it does boogle my mind a bit that they decided to release these formulas as is. I would think, after seeing swatches, that they would go back and reformulate the Jade until it was actually GREEN. Alas, they did not.

01 Mercury Twilight on the Left, 05 Jade Groove on the Right

It’s clear Mercury Twilight has a stronger holo. It also offers a much greater rainbow spectrum as the cool tones in the Jade Groove seem to either entirely remove or tone down the spectrum’s warmer colors.

A good example showing both these points:

In dim light, lighting in which the holographic properties hide, there are more subtle differences. The Jade Groove appears like a darker, grey version of the Mercury Twilight. I was expecting for it to actually be green, however the differences are truly negligible.

For the most part, it simply looks grey:

The brushes, price points and volume are all the same. In regards to the formulas, I noticed Jade Groove is slightly more opaque in application and does dry faster. While this might make for longer use (needing less lacquer to achieve opacity). I don’t believe it’s enough of a difference to even matter. IE. 4 super thin coats with Jade vs 5-6 super thin coats with Mercury.

So, what’s the verdict?

While many blogs may find these differences enough to justify purchasing both, I find these far too similar. I wish I had known about their likeness prior to purchasing the Jade Groove, as I would have chosen to go with those that are of greater difference (like the black or pink).

There is barely any color difference and yet the holo is much stronger and clearer.

PS. That Yoda is a Halloween edition “zombie Yoda” and yes, he creeps me out too from atop my refrigerator.

AND! A quick update on the Layla Hologram polishes. They are now sold at Ulta! Both online and in stores for $15.50 retail. I know there are some Ulta stores that have yet to put out their displays, but be patient. The main Ulta I frequent just put theirs out last week. I also want to point out that my Ulta put their display next to the registers, completely aside from the normal section of new collections (and apart from the Layla Magnetic display) so look around or ask if you can’t find it!

If you love internet shopping as much as I do, you can click here to find Mercury Twilight on Ulta or here to find it on Amazon. Both of these vnues usually offer free shipping!