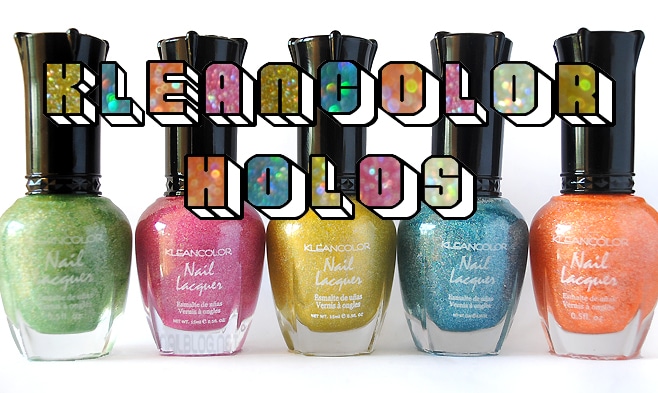 I recently picked up five new Kleancolor nail polishes (found HERE) and have swatches, review and breakdown of them for you today.

With holographic nail polish being so very in (add “forever” after that and etch it on my heart), I thought many people may be looking at Kleancolor’s holos and wondering how they stack up.

Firstly, try to get any linear images out of your head right now. These aren’t linear, they don’t look like Lisa Frank stickers or foil trading cards nor do they shoot rainbows. and it would do them a disservice if they were compared to such! What they are, however, is a collection of gorgeous, sparkly, scattering of holo dust -and lots of it- suspended in sheer color or rhinestones jewels.

They are, true to company form, named very appropriately:

(Mr. NB is behind me giving two giant thumbs up) 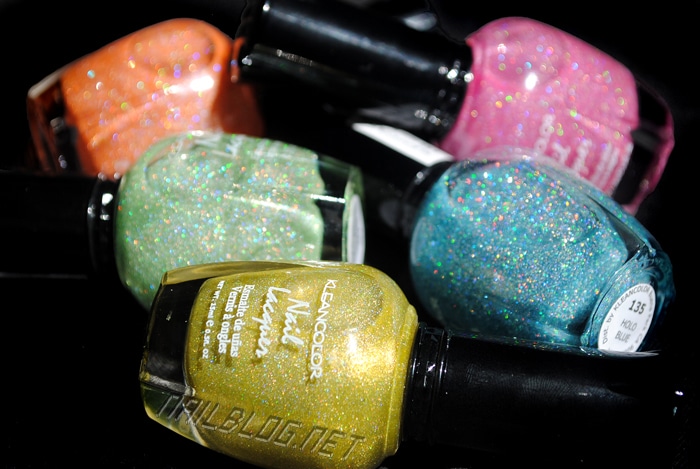 All of these colors posses the classic Kleancolor smell, which is chemical and a little stronger than your average lacquer. It does not bother me, but it something to make note of.

They are also notably sheer, some more-so than others.

My rebellious, name-taking, anarchist side is very subdued today so let’s just keep it structured and go in order:

Kleancolor “Holo Pink” is a raspberry pink that is slightly lighter and slightly pinker on the nail than in bottle. No application problems.

To give a better idea of Holo Pink’s opacity:

With a lacquer of this nature, it can be super hard to capture just how sparkly it is. These truly give great.. bling? dazzle? zazz? They easily sparkle as much, if not more, than the magic you see within the bottle.

I also want to stress that, despite any pictures that may show differently, they are all equal in the amount they sparkle.

Shooting out of focus can really capture how a sparkle shows in-person.

Unlike linear holographic polishes, these retain their colors quite well regardless of lighting:

Kleancolor “Holo Blue” is an aqua blue which is very true to it’s in-bottle color. Oddly enough, this color doesn’t smell anyhere near as strongly as the other four. No application problems.

To give a better idea of Holo Blue’s opacity:

Kleancolor “Holo Green” is a light, spring green that is much lighter than expected and much lighter on nail than in-bottle. No application problems other than with opacity. This is the sheerest of all five colors.

To give a better idea of Holo Green’s opacity:

Kleancolor “Holo Yellow” surprised me in that it is much more of a gold color than anything. It is also the most opaque of all the shades, covering nicely on both coat one and coat two (only two coats were needed vs four coats with the others). I am not a yellow person yet this was one of my favorites of the lot.

To give a better idea of Holo Yellow’s opacity:

Kleancolor “Holo Orange” is a slightly burnt orange that is on the more opaque side. These swatches are all of 3 coats vs the 4 needed with the blue, pink and green. It is very true to in-bottle color. Yet again, this orange also holds true to the typical Kleancolor orange in that in addition to the chemical smell, it smells FRUITY! No application problems.

One interesting attribute I noted was that, unlike the four others, “Holo Orange” contained both small AND large holo glitter. (Arrows below point out the large hex glitters)

To give a better idea of Holo Orange’s opacity:

In summation, I really do like these. There were no application problems and found them to be really pretty. Their finish is a bit dry and gritty, but any topcoat will easily fix it. I haven’t found myself wearing the colors straight as seen in the above pictures, but rather as layering polishes. They look amazing when you want to add something extra atop another color.

(Terrible picture but you get the idea)

Kleancolor Nail Polish can be found at various outlets online including Ebay/Amazon. I found a set of all 6 Holo colors (the 5 seen here plus a 6th; a dark purple I wasn’t aware of!) on Amazon for only $5.08: HERE

I buy mine in bulk (feels like Christmas). Pick out any 24 colors out of the entire Kleancolor line for $26.00: HERE

My helper returned for this post, and this time was not shy about makingttps://web.archive.org/w her internet-fame intentions known.

What do you guys think about these scattered holo polishes?