OPI “Spotted” polish, which is an “effect topper-polish” (is that a good term?) got me searching for what other types of “effect-topper-party-poppers” might be out there that I wasn’t aware of.

That’s when I stumbled onto… uh..ERROR ERROR HTML ERROR FONT REMOVED… (good job, Christina, for having the foresight to write it down yet not the care of keeping the paper). I believe it’s a nail polish brand that starts with a D (feel free to jump in, anyone) not from the US that offers a crackle polish a bit different than the crackle effect most of us are used to. Whereas most crackle effects are like weathered wood, this one offered clean lines and equal horizontal splitting. Similar to a tortoise shell!

So I went in search of {insert brand here} polish, only to find that I would have to do quite a bit of leg work and the cost would be $20 at minimum. I’m so strapped right now that I’m on a no-buy for air let alone another crackle polish.

Then I came across these swatches of Kleancolor “Crack”: 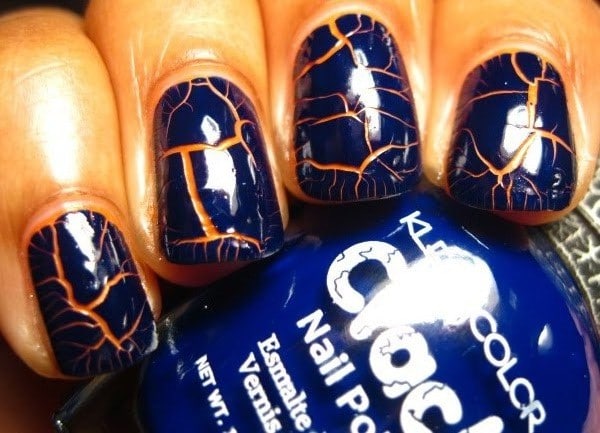 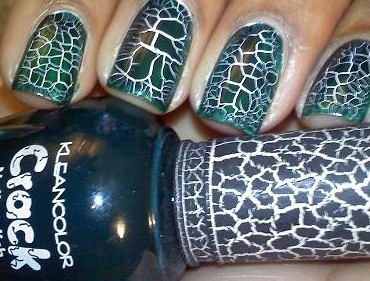 SEE THE EXCITING CONCLUSION TO OUR EPIC AFTER THE JUMP…

I ordered three as fast as I could. 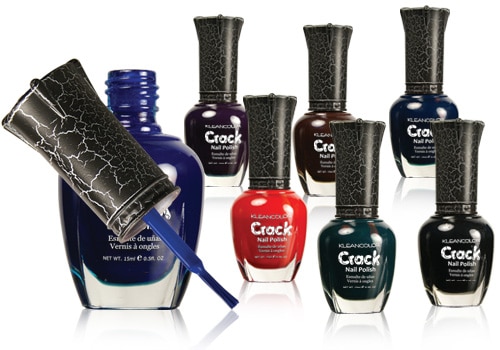 I chose Black, Teal, and Blue.

I anxiously awaited my package. There were a few times while waiting in which I would go in search of blog swatches to look at the pretties that were on their way to me. I came across a Youtube video of a lady who bought the entire set at a yard sale. This was a rant video. Not a single one of the polishes delivered on their claim. She swatched them on video to show the viewers, and nothing happened. I didn’t see her do anything wrong but what do we all usually think? “Oh well she must have done something wrong” or “she got a bad batch…or something..” or “meteors!”

RUN HOME CHARLIE, AND DON’T STOP FOR ANYTHING!

I was wearing a matted Rainbow Honey “20% Cooler” over OPI “Gargantuan Grape”. I could not be bothered with formalities such as acetone. These two were going to meet each other before the bubble warp hit the floor, and they were going to like it.

I swiped on a medium coat.

I felt like falling to me knees and screaming towards the heavens for her forgiveness of my doubt.

Something was happening… something diseased.

Before my eyes the polish was shriveling up, cracking and then flaking off. What you see in these pictures was done entirely by itself. I had not touched it or manipulated it in any way. 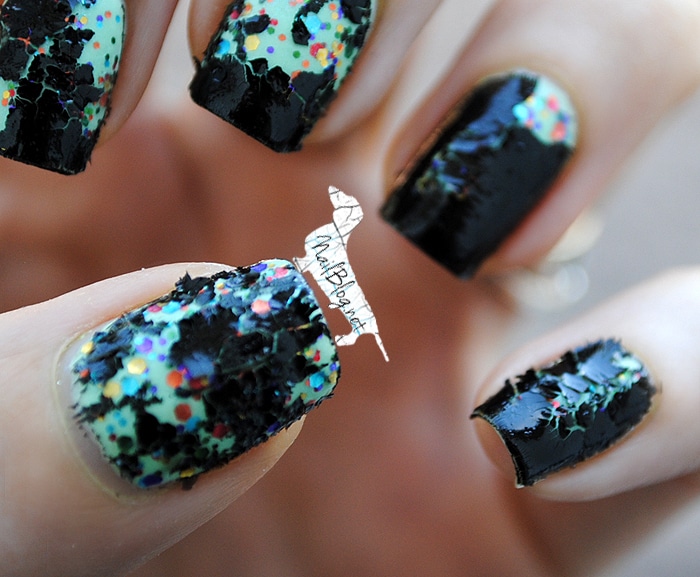 and after rubbing my fingers over them… 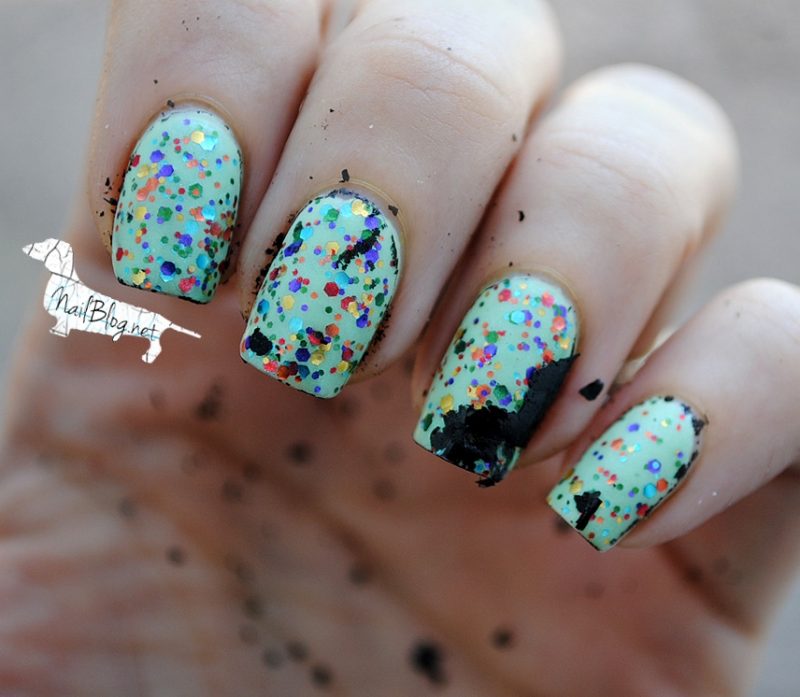 Ok, so clearly something was wrong. Perhaps it was something else entirely. So I took some remover and removed the matte coat covering my current polish and tried again. 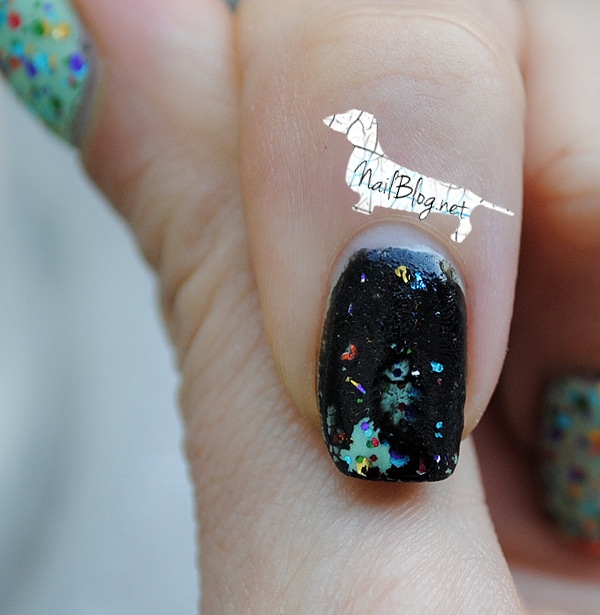 Maybe it was afraid of color.

Over a bare nail: 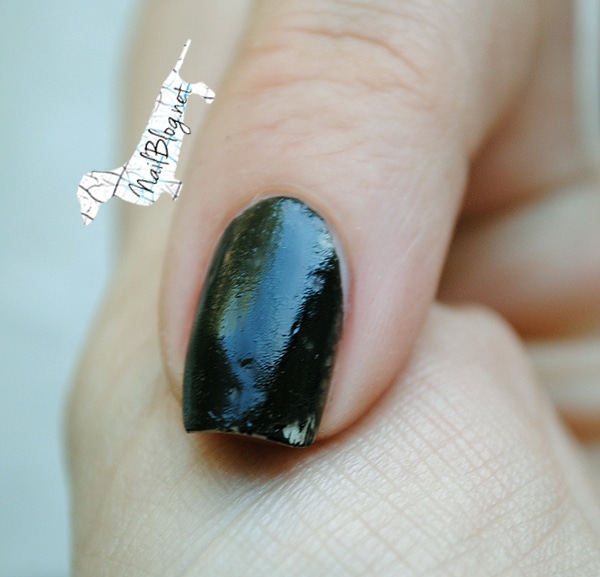 Well, that was fun.

I went to the internet and told it my woes. It told me it had Justin Beber, tube socks, fetish videos and my answer.

Kleancolor CRACK is not your normal crackle polish! 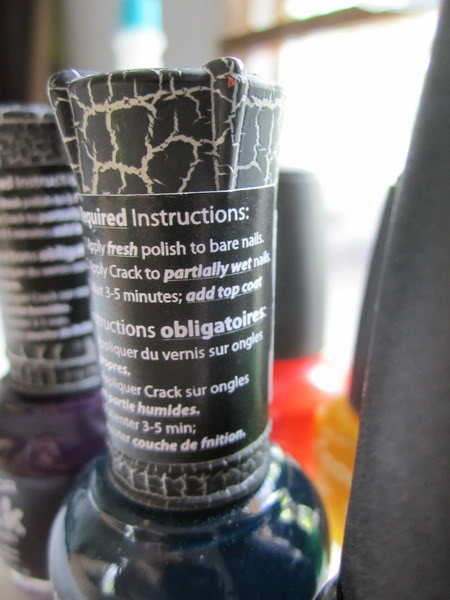 Did you catch that? 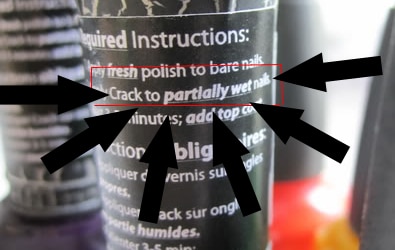 Alright.. let’s give this another shot.

(In the following pictures my index features too thin of a coat, try to ignore it’s presence)

So this lacquer is a bit of a hardass. This is one medium coat of “Teal” over China Glaze “For Audrey”. It seems each polish is different in it’s optimal tackiness for this polish. To get optimal results, there is potential for plenty of trial and error. So don’t expect application to be 100% effortless. 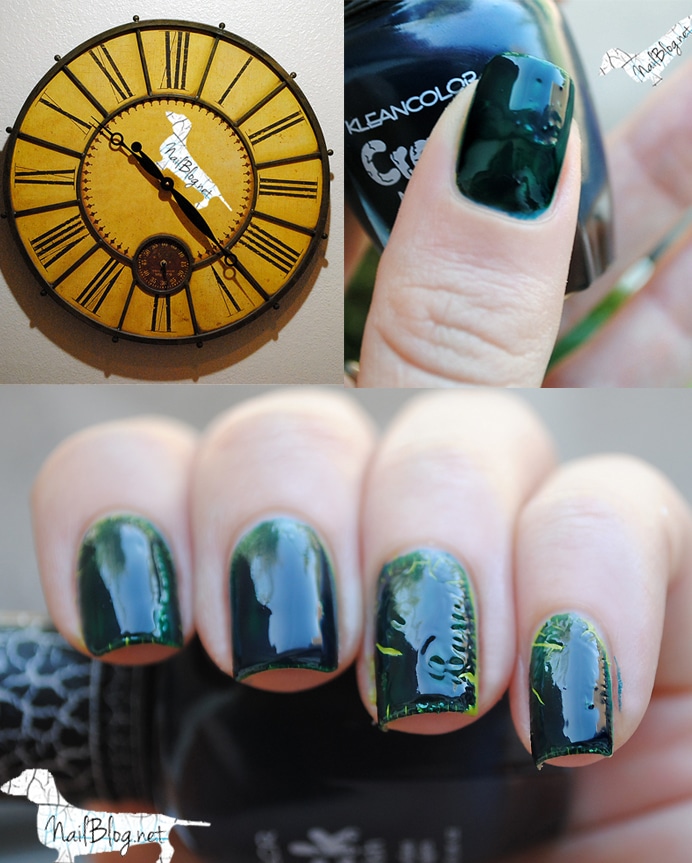 (taken immediately after application, the time it took me to walk from my kitchen to the window) 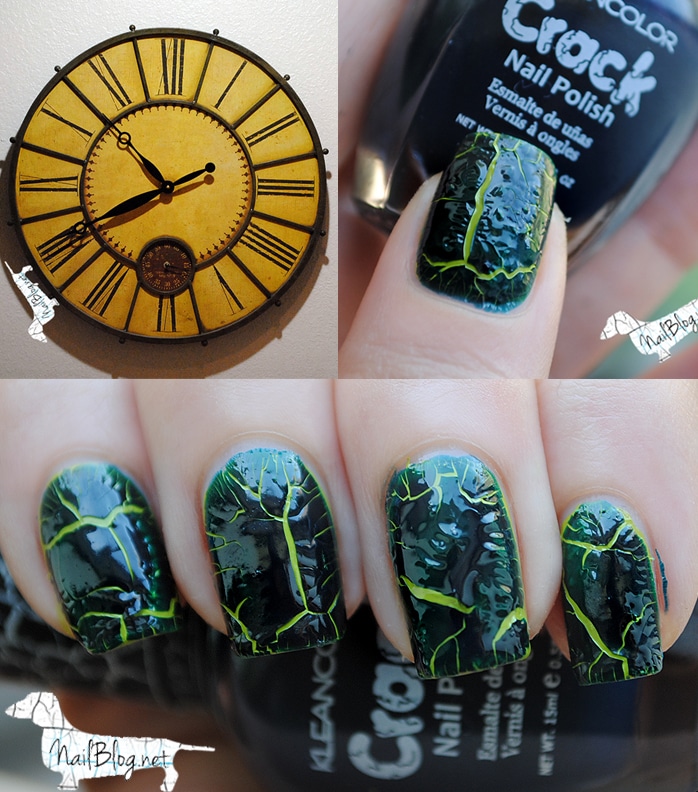 As you can see from the above sets, this polish’s crackle is not just difference in appearance but in finish too. There is a lot of texture going on here. 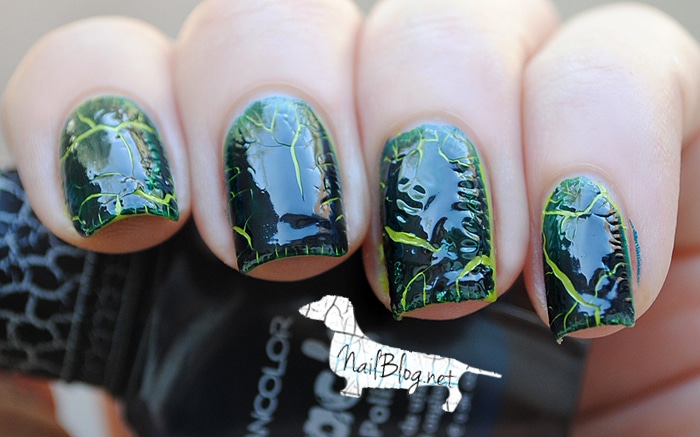 The cracks are very deep rivets and the uncracked portions look like crinkle wrap left next to a hot burner. The thicker your base polish is, the more “texture” you will get. As you can imagine, this also drastically increases your dry time and you will get less cracks.

When I read that it had to be placed over a tacky polish and adhered to this base, inevitably altering it in the process, I assumed the base would have to be pretty thick. Not just for the color to show but to avoid any nail lines or bare nail spots. Definitely not the case. You can easily get away with putting just one coat of your base color on.

One regular coat of base color followed by one medium layer of CRACK followed by top coat.

I read a lot of negative reviews online regarding this texture, however I love it! It adds to how different of a crackle this line is. 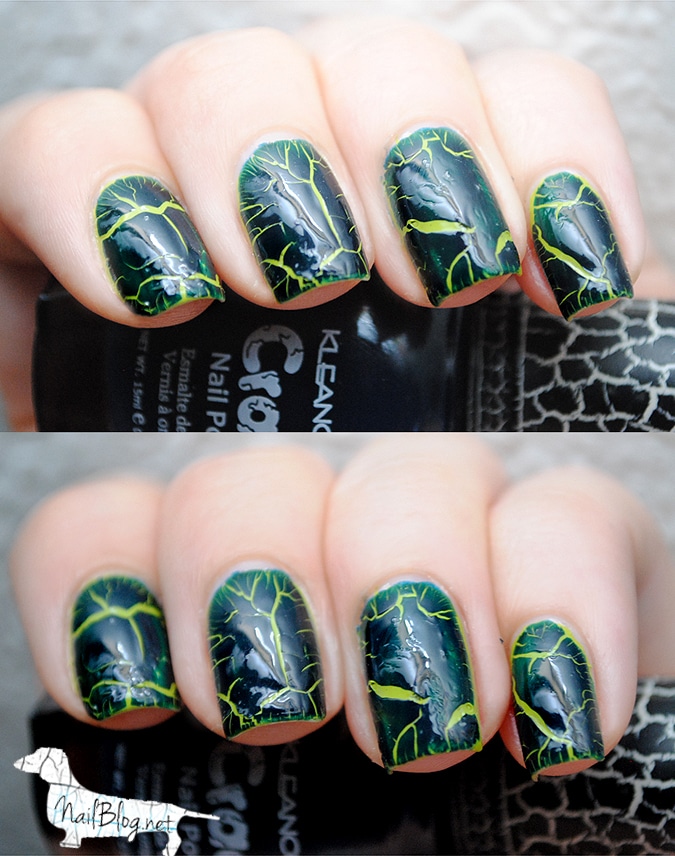 All swatches one coat Kleancolor “Teal” over Spoiled “I Only Eat Salads” topped with Regular topcoat. 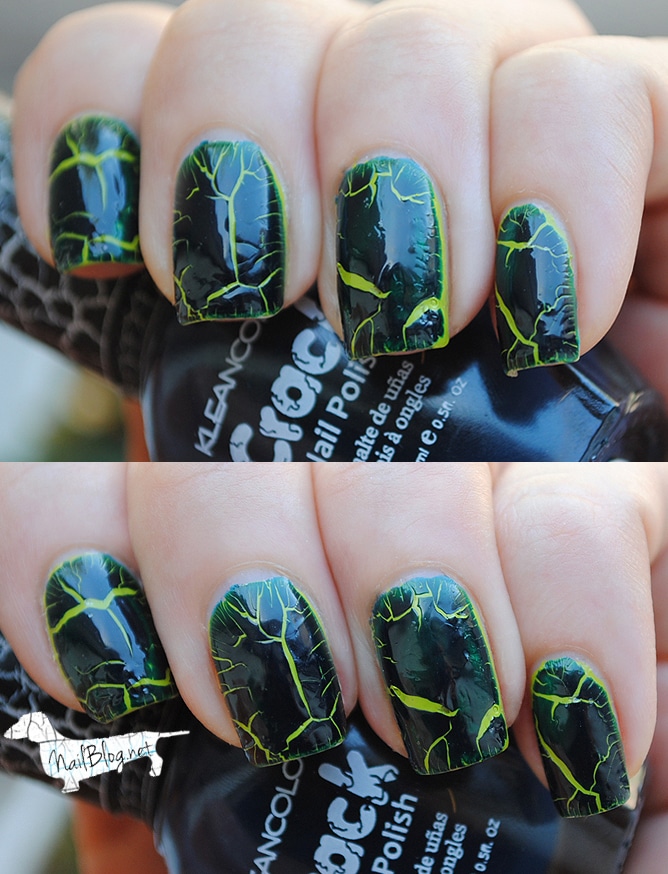 And a note about topcoats when using this polish: In my experience a “regular” top-coat has to be used with this line. When trying Seche Vite and Gelous, a few hours later I would experience bubbling and even what happens to old car window tinting. There’s an odd separation of the top coat and the polish..not pretty and will drive even those with even the most minor OCD tenancies crazy. 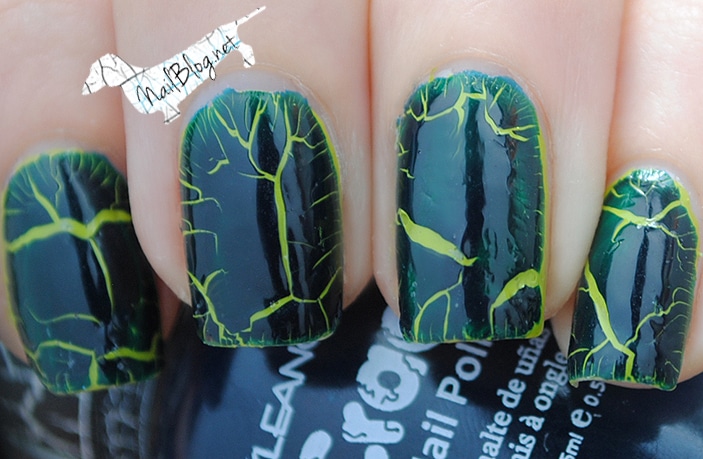 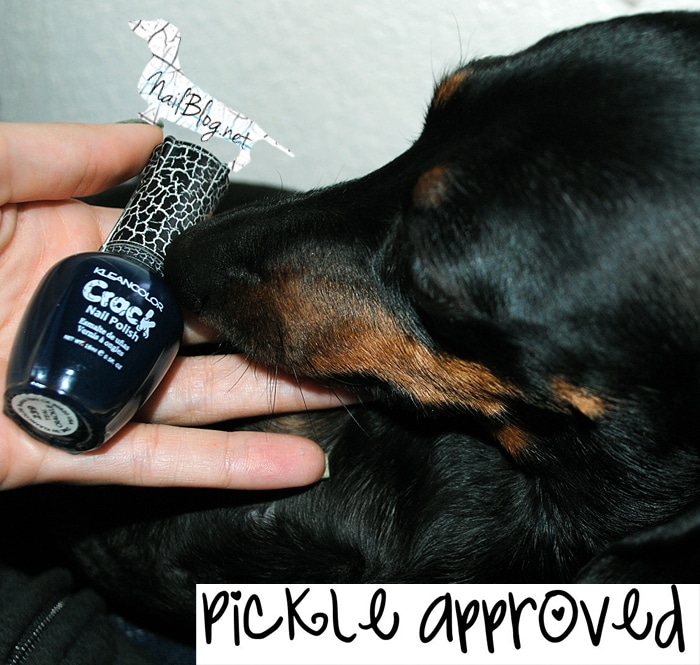