Gothic nails for a rocking wedding

Yesterday was the wedding of two of my friends and as they are very much the rocker type, they decided to theme their wedding around rock music and attire. Queue stress about outfits and makeup.

In the end I chose a lovely dress from Next that was a dark purple, green and grey floral pattern floaty number that was short at the front and long at the back. With it I put black tights and my ‘Spice Girl’ black platform heels. Makeup-wise I went for dark metallic eyes and simple lips, and was actually very pleased with the final effect (which makes a change).

The nails however were an entirely different story. On Sunday night I must have tried about five different ideas that I just hated, but upon waking morning I had another idea. I realized that I hadn’t used my Maybelline Cosmic Flash in a really long time and thought I would look really great over a black. While I was rooting through my polish box, I came upon my Rimmel Pro Matte Topcoat and thought the matte effect would make it look even more edgy! 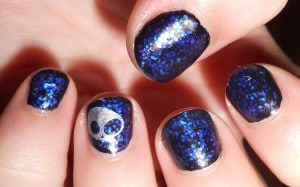 So I painted my nails and then found a skull stamping image on one of my Bundle Monster plates an thought it would look good accented in silver. I put Barry M Foil Effects Silver onto the plate, scraped the excess off and stamped the nail stamper onto it. Unfortunately that was the last bit that went well. When stamping the image onto my nail I discovered that even though my nails might look dry and feel dry, they definitely were NOT DRY.

So a smudged nail later, I then had to repaint a nail and wait FOREVER to make sure it had dried properly before attempting stamping again. Second time lucky, it stamped ok. It could have been better as it missed out the skull’s teeth, but you can’t really tell I don’t think.

It was so weird not doing a topcoat on top of the stamped image, and while I was having my shower before getting dressed I was paranoid that the design would come off and kept checking my nails every thirty seconds. It survived fine though, and I’m actually quite reluctant to take it off today.

For my gothic nails I used: